Abortion should be available for rape victims, says Shatter 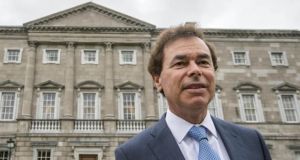 Alan Shatter said when he was a minister he talked to the Attorney General about dealing with fatal foetal abnormalities under “ordinary” legislation.

Former minister for justice Alan Shatter has said the next Government should legislate for abortion in cases of rape and fatal foetal abnormality.

Mr Shatter said a woman who was the victim of rape and became pregnant should not be “compelled” to continue with the pregnancy.

“I think it is a terrible cruelty that we keep women in this position. And effectively leave women who wish to address the very difficult and tragic circumstances they find themselves in in a position where they have to travel to England to have these issues dealt with.”

The Bill published by Independent TD Clare Daly was an attempt to present a difficult issue in simplistic terms, Mr Shatter argued.

He said when he was in Cabinet he had discussed with Attorney General Maire Whelan the possibility of dealing with the issue of fatal foetal abnormalities under “ordinary” legislation.

Ms Whelan was firmly of the view that would give rise to Constitutional difficulty, Mr Shatter said.

“So what the Taoiseach and colleagues have informed the Dail in recent days is correct.”

The former minister for justice said he hoped Fine Gael or whatever parties composed the next Government would agree that a fresh referendum on abortion legislation would be held.

“I hope it will be held within the early days of that Government being in office.”

He conceded it might be optimistic to hope for a considered debate.

“I think that as a very minimum the time has come when we must recognise the plight of women who have fatal foetal abnormality or are victims of rape can simply not be ignored.”