Eighth referendum is splitting opinions, even within families 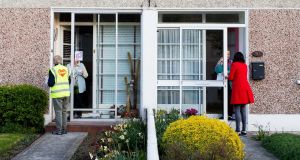 Together For Yes canvass in Perrystown, Dublin 12: Canvassers on the doors frequently end up engaging in very long – and inconclusive – conversations. Photograph: Tom Honan

The house is on a corner site on which a second home has been built.

The man who answers the door is in his 50s and it is clear he has thought long and hard about the issue.

“I have no hassle with abortion being allowed for rape or fatal foetal abnormalities,” he says. “I have a serious issue with 12 weeks. On a personal view, also I do not trust any government.”

He tells the canvasser that he and his daughter, who is a Yes voter, have had “serious chats about it”. But on those two issues he is not for turning.

The canvasser moves on to the newer house next door and a young woman answers. “We are all voting yes here,” she declares.

It is then the penny drops that two generations of a family live next door to each other.

She nods over to her father’s house. “They are voting no,” she says. “I can’t change their minds, but not for the want of trying.”

That small encounter provides an illustration of how complex a proposition the referendum on the Eighth Amendment is proving to be, splitting opinions even within families.

We are with Together for Yes campaigners in Perrystown, a rock-solid suburb in Dublin 12, with wide grass-verged streets, mature trees and big gardens. This is an urban constituency where one would expect a majority in favour of repeal. But then the demographic of this long-established community is older. There are more opposing repeal than were evident in Castleknock earlier in the week.

The most noticeable thing, though, is the comparatively high number of people who remain undecided. Canvassers on the doors frequently end up engaging in very long – and inconclusive – conversations. By the time they come out on the street to rejoin the canvass, the yellow hi-vis jackets of their colleagues have become specks on the horizon.

The No campaign maintains that in more established communities in Dublin – where, for example, there was a strong traditional Fianna Fáil vote – it could do better than polls suggest.

Against that, seasoned Yes canvassers say that in general this constituency has been positive and the Yes side has droves of volunteers here.

Earlier, a team of 20 volunteers assembled outside Dunnes Stores in Ashleaf. The organiser, Fergal O’Flanagan, gave the team a very detailed briefing on an ambitious canvass which he determinedly and energetically ensured was completed that evening.

The first door of the night canvassed is a very strong no but the Yes backers come quickly after that. A man in his 40s engages in a long conversation. “I am probably 60-40 per cent for yes,” he says, “but the 12 weeks just causes me difficulty.”

A woman in her 80s talks to two experienced canvassers. “To me it’s killing somebody,” she says of the 12-week proposal. The exchange takes 10 minutes. For both sides, these long one-to-one “conversations” – although exhausting and time-consuming – are of vital strategic importance, as they are the best way of persuading the undecided.

Helene Kamalandva, originally from France, is surrounded by her three children, all under 10. She is unequivocally voting yes. Most women of her age group encountered by the canvass are of the same view.

The fundamental issue is, and this has come up over the past couple of weeks, that people do not trust the Government to make the right decision

One canvasser chats to a young bearded man who is voting yes but needs to register. This is a regular phenomenon and both the Yes and No sides are armed with registration forms to try to get voters registered by the May 8th deadline.

“We have had a long canvass tonight,” says Tara Deasy. “The majority of people are yes but there are still some people who are undecided. In the majority it has been positive. People have been open to conversation. We just have to keep working on the undecided.”

Those wavering, she says, cite the 12 weeks and politicians. “The fundamental issue is, and this has come up over the past couple of weeks, that people do not trust the Government to make the right decision.”

But having said that, she concludes, “I think in Dublin South Central it certainly will be yes.”

O’Flanagan does the tot-up with his canvassers. Yes votes are at 137, no at 50 and there are 68 undecideds. It’s the second time this area has been canvassed and there seem to be slightly more undecideds this time.

As we walk away, O’Flanagan, who came of age politically around the time of the X case in 1983, says: “We will need to get 30 per cent of the undecideds to side with us here to carry it (nationally).”

Despite the uncertainty, he believes the Yes vote will prevail here. Like much else in this campaign, nothing is assured.