Abortion Act to become law from start of January 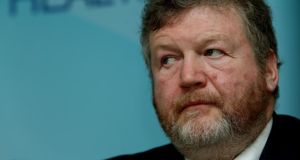 An order commencing the Protection of Life During Pregnancy Act 2013 from January 1st has been signed by Minister for Health James Reilly.

The move was welcomed by a number of Government TDs and condemned by the Pro Life Campaign.

The Act provides for a termination of pregnancy where there is a real and substantial risk to a woman’s life from a physical illness, including from the risk of suicide.

The regulations cover the content of “the prescribed forms for the purposes of certification, notification and for applying for a review of a medical opinion”.

In order for a termination to take place, two medical practitioners will have to examine the woman and jointly certify that the risk to her life can only be averted by carrying out the procedure.

Review
The regulations also provide for the review of a decision to allow a termination and they set down the procedures for recording terminations and notifying them to the Minister for Health.

The hearings by the Oireachtas health committee which marked the first stage of the legislative process began in January of this year.

The Bill was passed by the Dáil and Seanad in early July and signed by President Higgins later that month after he had convened a meeting of the Council of State to advise him.

“Irish women have had to wait 22 years for their constitutional rights as determined by the Supreme Court in 1992 to be underwritten by the law,” said Ms Ferris. She added that the legislation removed from doctors the fear of a possible Medical Council investigation for exercising their moral duty to save a woman’s life. “This is a good day for women and for the medical professionals in our hospitals who care for pregnant women.”

Cora Sherlock of the Pro Life Campaign accused the Government of engaging in a dishonest debate leading to the passage of the Bill. “Everyone in Government knows that the legislation was not needed to save women’s lives. That is why the Government had to browbeat their TDs to vote with their party and against their consciences,”she said.

Ms Sherlock added that the Government had spent time and money on focus groups to come up with language that would confuse the Irish people into believing the legislation would be good for women.

“It will take time but the lies that have been told will eventually be exposed,” she said.