A choice between high-minded drama or low farce 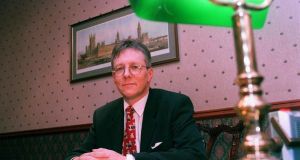 Peter Robinson: a deal in the coming weeks would certainly suit the First Minister and the DUP. Photograph: Stephen Davison

After Thursday’s befuddling excitement of Peter Robinson “standing aside” from his First Minister post to hand over to Arlene Foster in the political equivalent of a blood substitution, there is once again a temporary lull as the players find a second wind.

Whether Robinson comes back on the pitch again and allows Foster to stay solely in her field position of Minister of Finance, rather than doubling as acting First Minister, is down to whether the key parties are looking to a political solution or to an election.

All the parties, of course, pledge that they want the former, but there is no doubt that they are also considering the latter.

Were either Robinson or Martin McGuinness to formally quit the game then Northern Secretary Theresa Villiers under current legislation would be obliged to call elections. McGuinness says Sinn Féin doesn’t particularly want elections, but if they come, well, bring them on.

And he’s probably right to be so blasé.

The police assessment that the IRA still exists and that some of its members were implicated in the murder of Belfast republican Kevin McGuigan, although without the sanction of the purported IRA leadership, triggered a political crisis, but it is unlikely to cause Sinn Féin much– or any – damage in an Assembly election.

There will be a cynical view that this is simply about Robinson and the DUP saving their electoral skins after Ulster Unionist Party leader Mike Nesbitt outflanked them by withdrawing his Minister, Danny Kennedy, from the Executive.

But that would be unfair to Robinson. He’s invested much in this enterprise – even suffering a heart attack earlier this year – and this almost certainly is about more than elections, but about his political legacy and a genuine desire to see both Stormont and Northern Ireland work.

There is also the question of, even in the event of either Robinson or McGuinness resigning, whether Villiers would actually call elections. She might argue that the horse should be put before the cart and demand that the politicians come up with a political settlement before an Assembly poll, because what would be the point of elections to a continuing crisis?

That would annoy Dublin, Sinn Féin, the SDLP, and possibly the UUP – who see a real opportunity here to get one over on the DUP – because it would be contrary to the 2006 St Andrews Agreement. But it is a move Villiers could take. She owes Robinson for jumping through all those hoops in what Traditional Unionist Voice leader Jim Allister has described as a “pantomime”.

Sinn Féin really is the Teflon party. It’s something of a political mystery that this crisis, based on the assessment of a chief constable and a range of other matters that we are all familiar with, haven’t damaged the party. But maybe there is a tipping point. Perhaps if Stormont does combust it might give some of the stability-craving Southern electorate pause about whether to risk their votes with Sinn Féin.

So, what Charlie Flanagan and Theresa Villiers hope happens next is that the two governments and the five parties start engaging in real, serious, intensive talks at Stormont House on Monday and in the coming weeks.

They are banking on politics switching from low farce to high-minded drama.