A brief history of water charges in Ireland 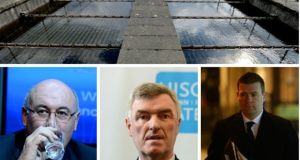 Fianna Fáil abolishes water charges, in the guise of domestic rates, without coming up with an alternative model.

Water charges are abolished in December 1996 by then environment minister Brendan Howlin, widely seen as a political move to block anti-tax candidates in a forthcoming election. Since then, the only domestic users who have paid for water are those in group water schemes. For the rest of us, the water is paid for from general taxes.

In his budget speech, minister for finance Brian Lenihan announces that preparations for water charges are underway and, when introduced, they will be based on consumption above a free allocation.

In a 2010 interview with The Irish Times, then Labour leader Eamon Gilmore rules out water charges on the basis of the cost of installing meters as well as ruling out a property tax.

In the National Recovery Plan, which outlines in detail how the government proposed to make €15 billion of savings by 2014, a decision was taken not to introduce an interim flat rate of residential water tax pending the installation of meters in 1.2 million homes connected to the public water mains supply.

The government publishes the memorandum of understanding on the conditions of the €85 billion EU-IMF bailout which says water charges will be introduced in 2012 or 2013, by which time metering is to have been installed across the State. This is a year earlier than expected. It also says the responsibility for water will be transferred from local authorities to a new water utility.

A spokeswoman for minister for the environment Phil Hogan dismisses claims by the Opposition that the Government has committed to introduce flat-rate water charges.

Mr Hogan confirms a procurement process for the installation of water meters is being entered into with the intention of having the necessary infrastructure in place early in 2012. Metered domestic water charges will then be put in place.

The Government confirms households will be liable for funding arrangements totalling more than €800 million needed to establish a water company, including interest payments on a loan from the National Pension Reserve Fund. Mr Hogan describes it as the most significant decision taken in relation to a State utility since the establishment of the ESB.

The Government also announced the contract to run the company has been awarded to Bord Gáis Éireann, of which Irish Water will become a subsidiary. Irish Water will gradually become responsible for supplying all public water in the State, taking over the role currently performed by the 34 local authorities. Mr Hogan says charges would be introduced in 2014 and Irish Water would have 90-95 per cent of the meters installed by the end of that year.

Irish Water is incorporated as a semi-state company under the Water Services Act 2013.

The Water Service (No.2) Bill 2013 is rushed through all stages in the Dáil over four hours on the 19th amid protest from the Opposition.

Irish Water’s chief executive John Tierney tells the Oireachtas environment committee it has kept the Department of the Environment abreast of its spending costs, and estimates that it would spend €85 million on consultants by 2015.

Mr Hogan’s spokesman says the Minister was unaware of the detailed breakdown of how Irish Water was spending the €180 million it needed to establish itself.

Government reaches agreement to eliminate €50 standing charge, which was seen to erode the benefit of allowances for households with children.

Controversy erupts as it emerges Irish Water staff will have access to a bonus payment regime - even in cases where their performance is classified as needing improvement. It is later announced that bonus payments for 2013 and 2014 will be suspended.

Commission for Energy Regulation grants one month extension to sign-up period for Irish Water customers with deadline extended until end of November. This follows reports that registration numbers have been underwhelming to date.

Opposition to the charges intensifies as upwards of 50,000 people marched against them in Dublin in one of the largest demonstrations seen in the capital in years. The Green Party calls for a referendum that would ensure water services remain in public ownership.

Tánaiste Joan Burton acknowledges that the timetable for setting up Irish Water had been “too ambitious”. Taoiseach Enda Kenny says the public must have “absolute confidence” in Irish Water if the regime is to work.

Anti-water protestors gather in Jobstown in Dublin where Ms Burton was attending a graduation ceremony. She is trapped in her car by the crowd for more than two hours and a row breaks out between Government figures and Socialist Party TD Paul Murphy as to whether or not it was a peaceful protest.

Minister for Environment Alan Kelly announces a revised water charges package with capped costs and a commitment to legislate to ensure a referendum must take place is water charges are to leave public ownership.