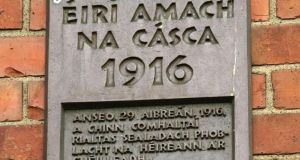 Commemorative plaque at 16 Moore Street where republicans decided to surrender towards the end of the 1916 Rising. Photograph: Frank Miller

Families of ordinary combatants who fought in the 1916 Rising are concerned they will be frozen out of the flagship centenary commemoration which will remain the preserve of VIPs, dignitaries and relatives of executed leaders.

Gerry Carroll (79), whose father fought in the GPO, says he was informally briefed by a Department of Defence official that it is “highly unlikely” he or his family would be receiving their regular invitation to the annual ceremony.

Mr Carroll’s brother Derick is a constituent of Enda Kenny’s and approached him at the Easter Sunday event in the GPO where he handed him copies of correspondence with the department, determined to get clarity.

Mr Kenny later responded with an email, saying, with no definitive plans, the department “are doing its best to facilitate early enquiries regarding invitations to that commemoration”.

Mr Carroll of the response.

The department said it could not confirm invitations to families until “details on the scale” of the event are established.

Earlier this year, Mr Carroll had a conversation with an official who left him with little hope the five members of his family would be on hand to mark 100 years since his father Patrick, then 18, fought and hid from British forces in Dublin.

He said the official was “quite emphatic that it was highly unlikely that we will be there based on what she was hearing in her department.

“She said because there are so many dignitaries being invited, her understanding was that the relatives of the signatories and those that were executed will be invited, but there would be no room for everyone else.”

Dave Kilmartin, who had three relatives in the Rising, said he had been in touch with numerous “garrison families” who are “extremely upset and just want to know”.

His grandfather Paddy Kilmartin, when in his early twenties, was in the GPO and on the South Circular Road. His sister Mary Kilmartin was a member of Cumman na mBan and administered first aid in the Four Courts while her husband PJ Stephenson was a courier delivering information to James Connolly.

He said the principal concern is that they will be edged out in favour of a list of dignitaries and VIPs.

The department said “until precise details on the scale of the arrangements for the 2016 event are known, no confirmation can be given in relation to invitees”.