This latest ‘western plot’ might be a little far-fetched, even by Russian TV standards 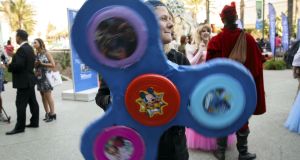 The West in general and the United States in particular are hatching all manner of diabolical anti-Russian plots, if reports in the state-controlled news media are to be believed. However, the latest example of what is being portrayed as American skulduggery might be a stretch, even by the elastic standards of Russian television.

Beware the so-called fidget spinner, a hand toy that spins and has become the must-have toy in the West and in Russia, particularly among young school students. Such a harmless trinket, you might think, would be destined for a moment in the spotlight followed by a long fall into oblivion, where it would join pet rocks, Beanie Babies and New Kids on the Block.

Perhaps not so harmless, according to one recent report on Rossiya 24 suggesting that Russia’s opposition parties were trying to lure young supporters and raise money by hawking spinners. (The fact that many of the participants in recent nationwide demonstrations organised by the anti-corruption crusader Alexei A Navalny were young Russians had to be explained somehow.)

“It is a mystery why it has become so popular in Russia right now,” the television reporter said. “Who is promoting this to the masses so actively?” Cut to a clip of a video blogger selling spinners during anti-corruption demonstrations in June under the banner “Spinners from Navalny”.

The reporter then held up another piece of evidence from his investigation: a spinner bought at a Moscow children’s shop packaged with writing only in English. “Not a word in Russian,” he cautioned.

Commentators piled on, noting that the spinners might indeed be an attempt to “zombify people” so that they could be manipulated. “In such a manner, our opposition is luring the youth,” Ruslan Ostashko, the editor-in-chief of a pro-Kremlin website, politrussia.ru, told Rossiya 24 in a separate report. “Those who understand political technologies, they understand very clearly that this simple thing is controlling the masses.”

Russia’s consumer protection agency, Rospotrebnadzor, got into the act Tuesday, announcing that it would investigate the toys. “There has been an aggressive promotion of so-called spinners among children and teenagers in Russia recently,” the agency said in a statement. “Taking into consideration the anxiety among the community of parents and teachers, Rospotrebnadzor, in co-operation with child health research institutions, will study the effect spinners are having on children, including the possible negative impact.”

Russia is not alone in harbouring concerns about spinners. The hand-held devices have been modified to carry all manner of harmful things, such as knives and firecrackers, becoming more weapon than toy.

In Germany, customs officials confiscated 35 tons of spinners in May. There was no clear indication of who made them, said Christine Strauss, a spokeswoman for the customs authority, and they posed a danger to young children, who could swallow small parts such as the ball bearings that make the toys spin.

Although some therapists have said that the spinners help people with attention disorders, various schools in the United States have banned them as a distraction. The toy seemed to achieve cult status recently after the NBC comedy show, Saturday Night Live, produced a spoof advertisement for a diamond-encrusted fidget spinner from Cartier.

In Russia, you can actually buy a real gold spinner for almost €15,000. Russia also seems to have cornered the market on politicising the potential side effects. Navalny, never one to miss an opportunity to mock the government or its suspicions, posted a video of himself on Tuesday that showed him spinning a small device while awaiting the verdict in one of his recent trials. The consumer protection agency going after spinners, he said, was “a gang of freeloaders sitting on our necks”.