Priests told to leave pub over ‘no fancy dress’ rule

Catholic archdiocese sees funny side after student seminarians in mix-up 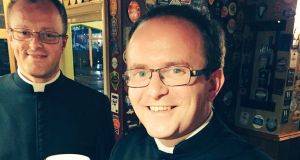 Seven student Catholic priests wearing black clerical clothing were asked to leave a pub because bar staff thought they were in fancy dress and on a stag party.

The seven seminarians had repaired to the City Arms pub in Cardiff to celebrate a colleague’s ordination with a few pints of beer.

But bar staff, who were worried they were a bunch of lads likely to become lairy, told them: “Sorry gents – we don’t do fancy dress or stag dos”.

The group failed to convince staff their outfits were genuine and were about to try their luck at another of the Welsh capital’s watering holes when staff finally realised that they were telling the truth, invited them back in and treated them to a round of drinks.

Assistant manager Matt Morgan apologised for the mistake. He said: “They were all dressed in their black and white clothes and the staff thought they were on a stag do.

“We do have quite a few issues on the weekends with parties wearing fancy dress so it is our policy to turn them away.

“I started to realise that they were quite serious and in the end we invited them in and gave them a free round of drinks.”

The group laughed about the mix-up, especially when it emerged that one of the party was called the Rev Robert James, sharing a name with one of the pub’s most popular ales – the Rev James.

The Archdiocese of Cardiff said the seven took the episode in good humour.

A spokesman said the seven were initially shocked but then their only thought was: “Where are we going for our pint now?”

The spokesman said: “We’d like to thank the City Arms for being good sports through all of this and their kind gesture to our seminarians – and please note a number of our clergy, including the Archbishop of Cardiff, frequent your bar so don’t turf any more out please!”