Did it give you a giggle? A pound coin gag wins funniest joke award

Top 15 jokes voted the funniest at the Edinburgh Fringe 2017 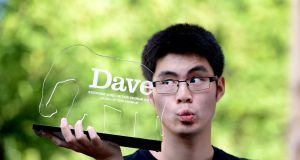 A joke about the new pound coin has been named the funniest of the Edinburgh Festival Fringe.

Ken Cheng won the 10th annual award for Dave’s Funniest Joke Of The Fringe with the line: “I’m not a fan of the new pound coin, but then again, I hate all change.”

The joke, from his show Ken Cheng: Chinese Comedian, won 33 per cent of a public vote on a shortlist of gags picked by comedy critics.

Previous winners of the award include Tim Vine, Stewart Francis and Zoe Lyons.

Cheng studied maths at Cambridge for a year before dropping out to play online poker professionally.

His big break in showbiz came when he reached the final of the 2015 BBC Radio New Comedy Award.

On winning the Dave prize, Cheng said: “I am very proud to have won. As a tribute, I will name my firstborn son after this award and call him ‘Joke of the Fringe’.”

Frankie Boyle came second in the poll for his line: “Trump’s nothing like Hitler. There’s no way he could write a book.”

The award, which was voted on by 2,000 people, lists jokes anonymously to avoid any bias towards well-known comedians.

Steve North, general manager of Dave, said: “From Trump and veganism to the new pound coin, this year’s news agenda has certainly also provided some great inspiration for comedians to get grips with — it’s fantastic to see that, even after ten years of the Joke of the Fringe award, there is no shortage of brilliant one-liners delivered at the Festival to get us all laughing.”