A Barney over storm names: wait ‘til you see what’s coming 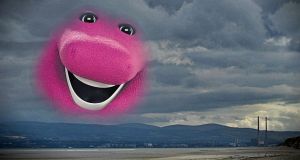 Batten down the hatches, Barney’s on the way. Then Clodagh and Desmond, followed by the terrible trio of Eva, Frank and Gertrude.

Abigail came to our shores and now Ireland and the UK are set for Storm Barney, as Met Éireann ramps up warnings of strong winds and “potentially damaging gusts”.

Unsurprisingly, the storm’s name has been made fun of social media, with the majority of people making the irresistible comparison with the big, friendly purple dinosaur from the children’s programme, Barney and Friends. Barney Gumble deserves an honourable mention, too.

“So last week it was Storm Abi-gail and now Barn Storm, those guys at the Met Office are having a howler #StormBarney,” tweeted one user, while others pointed out that it makes the warnings difficult to take seriously.

Barney is the second storm name that we have only ourselves to thank for. In recent months, Met Éireann and the Met Office in the UK gathered suggestions from the public and came up with a roster of names.

Here is the full list of names we have to look forward to, in order:

#StormBarney It's hard to take things seriously when they come up with a name like that. Better than #StormBarry I guess.

Which is your favourite/least favourite upcoming storm name? Do you have any suggestions? Get in touch @irishtimes