Stormont parties united on need to address US president’s call 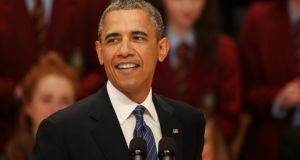 Northern Secretary Theresa Villiers said the Obama visit to Belfast and his Waterfront Hall speech made it “a great day for Northern Ireland, with one of the most powerful people in the world making a brilliant speech, entirely supportive of what’s happening here in Northern Ireland”.

DUP Minister for Finance Sammy Wilson said Mr Obama’s speech “hit the nail on the head” and he claimed the president was right to focus on the optimism of the young.

Alliance Minister for Justice David Ford said the president certainly “gave us a pat on the back” but “he also gave us a kick on the behind, because the job is not over”.

His Stormont Executive colleague, Sinn Féin Minister for Education John O’Dowd, said the speech was a clear indication that there would continue to be strong US interest in the peace process, he said.

SDLP leader Alasdair McDonnell said the president’s speech was as much a call to action as a message of congratulations.

“President Obama’s message today to all of us was both inspirational and challenging. The challenge he has set before all of us is one of building reconciliation and creating hope for our children and young people now and in the future,” he said. “President Obama is right – peace is much harder to achieve and maintain than war.”

Ulster Unionist leader Mike Nesbitt said the speech was “a welcome contrast to the first delivered by a serving US president . . . In 1995, Bill Clinton focused on the need to end violence with the words ‘Your day is over’ for the men of terror. Today, President Obama focused on the youth of Northern Ireland, people born after the ceasefires, and his message was ‘Hope is contagious’.”

Belfast Lord Mayor Máirtín Ó Muilleoir said he greeted President Obama in Hawaiian when he arrived at the Waterfront Hall in Belfast.

“Everyone had a good laugh when I greeted him with ‘Aloha’. I guess he wasn’t expecting that.”

1 Coronavirus: 442 new cases, 4 deaths as stricter house visitor limits recommended
2 Dr Tony Holohan expected to return to his post next week
3 Covid-19 infections from funeral led to a third of one restaurant’s staff self-isolating
4 How one couple’s weekend away resulted in 30 Covid-19 cases
5 Small children should be restricted to one square of chocolate a week
Real news has value SUBSCRIBE