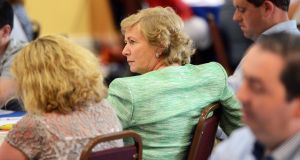 Minister for Children Frances Fitzgerald , at the Convention on the Constitution, at Malahide, Co Dublin, yesterday. Photograph: Eric Luke / The Irish Times

Fine Gael parliamentary chairman Charlie Flanagan has said he will raise with Taoiseach Enda Kenny and Minister for the Environment Phil Hogan what he said was the poor quality of an information note sent by Mr Hogan’s department to the Constitutional Convention.

Members of the 99-strong convention criticised the note which set out the department’s position on the establishment of an electoral commission; measures to improve voter turnout; the electoral register; and electronic voting.

The note referred to the Minister’s commitment to create a commission, but included no details about the issues. It also stated the other three issues were “not the subject of detailed scrutiny” in the department.

“I take the view that the reply from the department was lazy and showed a certain disdain and offence to the status of the Convention,” he said.

There was near-unanimous support in the votes for the establishment of an electoral commission, which would take over responsibilities from the department for holding elections.

Noel Whelan and Brendan Halligan argued respectively for the merits of the present electoral system and the alternative mixed member proportional system (MMP).

Mr Halligan, the Sustainable Energy Ireland Institute chairman and a former Labour general secretary, said Ireland had produced a parliament that, by and large, had put constituency interests above national interests. He mentioned the relatively mediocre performance of the committee system in Ireland, which he said should be a vital component for a legislature.

Mr Whelan, a barrister and political commentator, said if a list system were adopted the debate would focus on the power of a party leader as to who was on the list and the order of the list.

In comments to delegates, Prof David Farrell of UCD said the proportionality of MMR could be achieved under the current PR system. “The golden rule in all proportional representation systems is the larger the constituency size, the more proportional.”

Prof Ken Carty from the University of Vancouver said all systems involved trade-offs but the system selected should best match the values of that society.

On the question of direct democracy, Dr Jane Suiter of DCU said in California referendums are held to decide big policy issues. Saying it restored authority to people and curbed imbalances of powers, she also pointed out that there were downsides: Californians had backed contradictory policies – increases in public spending and decreases in taxes – in referendums.

3:30 Cost of Covid-19 to the exchequer is already 'potentially higher' than €8billion