Noonan says up to 30,000 new houses will be needed annually 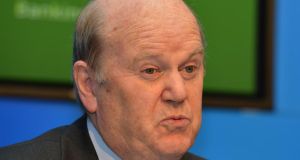 Michael Noonan: families need to move out of apartments

Minister for Finance Michael Noonan has predicted that up to 30,000 new houses will be needed from next year onwards in particular in Dublin where young couples with children are looking to leave apartments.

Speaking in Limerick today Minister Noonan said house prices are starting to rise again particularly in South Dublin which he said is giving a “strong lead”.

” Dublin as in many other areas is giving the lead and south Dublin is giving us a strong lead according to one survey prices are up 12%... These things can change very rapidly,” he said.

“There are a lot of young couples with children in apartments now and they are looking at houses. There is probably a shortage of houses in certain family home areas in Dublin. We’d need about 25,000 to 30,000 new houses each year as we plan forward.

“Last year there was less than six built so you can see there is a mismatch now between supply and demand and we would be conscious and we hope the market will pick it up in the first instance,” he added.

Mr Noonan was speaking in Limerick and was responding to two surveys published this morning showing asking prices for houses have risen in Dublin over the past year with south Co Dublin registering a spike. Asking prices continued to decline nationally, though at a slower rate than last year, according to reports by property websites Myhome.ie and Daft.ie.

This is the strongest annual growth recorded nationally since early 2007, says Daft.ie. Myhome.ie recorded a 1 per cent growth in Dublin in the second quarter of this year compared with last year, with average asking prices at €238,000.

Unilever’s Dutch and British arms merge after 90 years ahead of Brexit 12:26
‘Completely different economy’ needed to tackle emissions 12:24
Water body backs EPA call for ‘decade of action’ on Irish environment 11:59
Retail sales up by 8.1% in October compared to last year 11:52
Coronavirus search: How is Covid-19 spreading in your locality? 11:52