Anti-Semitic slogans painted alongside names of politicians and bankers 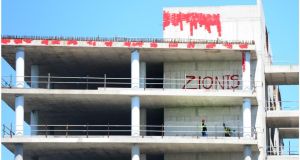 Workers paint over graffiti with red paint on the shell of the former Anglo Irish building on the North Quay Dublin near the IFSC. The building was sold by NAMA to the Central bank in 2012. Photograph: Bryan O’Brien/The Irish Times

The planned Central Bank headquartersin Dublin have been vandalised with anti-Semitic graffiti.

The unfinished building on North Wall Quay, which was previously the proposed headquarters for Anglo Irish Bank, was targeted by vandals overnight.

A Central Bank spokeswoman said the organisation had contacted gardaí about the incident and would be removing the graffiti as soon as possible.

“There are security arrangements in place at the site. We will now investigate how these failed to prevent this break in and damage and how they can be improved to mitigate this happening again,” she said.

The graffiti is extensive and the vandals appear to have scaled the entire building.

The surnames of a number of politicians and bankers were painted onto the building’s walls, alongside the words ‘Irish traitors’. The Star of David is also visible beside acronyms for the European Central Bank (ECB) and the International Monetary Fund (IMF).

At Risk security guard John Harte condemned the culprits, noting they would have been issued with an automatic warning over a loudspeaker when they attempted to enter the building. “It’s people just being stupid, as usual ... people that don’t care, they’ve got nothing better to do,” Mr Harte said.

The 21,400sq m building is surrounded by a 3m wall and signs clearly state that no unauthorised personnel should enter the site.

The building was once valued at €250million, but the Central Bank bought it from the National Asset Management Agency last year at a cost of €7million. The organisation plans to begin moving staff to their new headquarters by mid 2015.