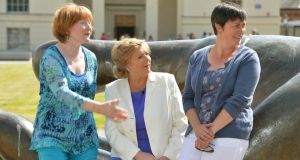 Gretta Murphy from Co Kilkenny with Minister for Children Frances Fitzgerald and Angela Murphy from Co Waterford in the Department of Education yesterday for the launch of the Association of Childcare Professionals. Photograph: David Sleator

All childcare workers should have professional qualifications, be formally registered and enjoy a standard work contract, according to a new body set up to represent their interests.

The Association of Childcare Professionals is also seeking access to further training, defined career paths and pay levels and a graduate internship programme.

The organisation says the high rate of staff turnover and short-term contract working in the sector is not sustainable. “Research shows that those who are best qualified are leaving the sector for areas with career paths. This creates an ongoing skills gap and de-professionalises the sector,” said association president Marian Quinn.

An RTÉ Prime Time programme recently exposed the mistreatment of children in three creche facilities, where secretly recorded footage showed staff manhandling children, shouting at them, snatching toys from their hands and strapping them into highchairs for hours.

Minimum requirement
Ms Quinn called for an initial statutory minimum requirement for all childhood professionals of a Fetac level 5 childcare qualification and a national register, with only those who are qualified and registered eligible for employment.

All workers in childcare centres, preschools and professionals contracted to care for youngsters in the home would fall under the proposed regulations.

“This qualification is currently required for professionals delivering the ECCE programme [free preschool year], but not for other age groups of children in childcare settings,” she said.

The body, which aims to give a voice to an estimated 22,500 professionals nationwide, wants the early years sector to become a fully developed professional branch in its own right, similar to teaching, medicine or law.

Higher standards
Minister for Children Frances Fitzgerald said she believed the new body would be effective in bringing about higher standards.

Asked whether low pay had been a factor behind the problems in the sector, she said she had asked officials carrying out a review to look at what HSE inspection reports of creche chain operators were saying and to see if there were any financial patterns.

Up to now, the focus has been on building childcare facilities and on direct payments to parents, she said. “We have to examine how to put quality into the sector now, and this will have financial implications.”

Meanwhile, Siptu has asked the Minister for increased Government investment in training for childcare workers.

Siptu vice-president Patricia King said the delivery of quality childcare was dependent on a highly skilled early childhood education and care workforce which enjoyed decent pay and conditions of employment.

“Too many qualified and dedicated childcare professionals are leaving the industry due to the low pay and poor working conditions in the sector,” Ms King said.