Six entries for scheme at Garden of Remembrance have been shortlisted 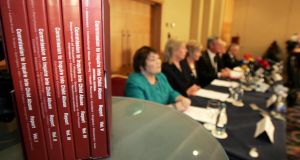 The proposal for a memorial was made in the Ryan Report, which said it should “ provide a point of reference with sensory significance that keeps alive the memory of those who suffered loss and pain”. Photograph: Eric Luke /The Irish Times

Dublin City Council’s planners are expected to approve the winning scheme for a memorial to victims of institutional abuse at the Garden of Remembrance in Parnell Square after they receive further information on the €500,000 project.

All six shortlisted entries for an international competition — including the winning scheme, “Journey of Light”, by Dublin-based Studio Negri and Hennessy & Associates — were unveiled tonight by Minister for Education Ruairi Quinn.

The winners say their project “creates a fluid progression between the Garden of Remembrance, which commemorates those who died for the cause of Irish freedom, with a memorial dedicated to the young victims of abuse” in Irish institutions.

A passageway, lit at night and flanked by fossilised limestone walls as well as “gently cascading” waterfalls, would be inserted to the rear of Oisin Kelly’s Children of Lir monument, in line with the Irish flag, with the State apology inscribed at child’s eye level.

The proposal for a memorial was made in the Ryan Report, which said it should “spotlight an episode of significance in the history of the State [and] provide a point of reference with sensory significance that keeps alive the memory of those who suffered loss and pain”.

After consulting with survivor groups, a memorial committee decided to hold an international competition to find the right design. From 32 entries, the shortlist of six was selected by a jury chaired by Sean Benton, former chairman of the Office of Public Works (OPW).

The site adjacent to the Garden of Remembrance was made available by the OPW for the project, which the memorial committee — appointed by Mr Quinn — said should be “an enduring symbol of lost innocence that inspires others to ensure the protection of all children”.

Mr Quinn said he believed the winning scheme would be “a testimony to one of the darkest chapters in our State’s history and ... serve as a constant reminder that we must never let such horrendous crimes against children happen again”.

All six schemes are on exhibition at the Darc Space gallery, 26 North Great George’s Street, until May 3rd. Further information from darcspace.ie

1 All students will not return to school even if social distancing rules are relaxed – McHugh
2 Coronavirus: Further nine deaths reported along with 46 new cases
3 Miriam Lord: Taoiseach is trapped in a Zoom session from hell
4 The human cost of Covid-19: Ireland's care homes with the most deaths revealed
5 Emily Maitlis thanks BBC viewers for support after Cummings row
Real news has value SUBSCRIBE