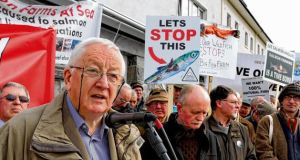 Up to 2,000 people, waving placards and banners proclaiming “Save Galway Bay” and the names of more than 20 angling and protest groups, marched through Galway city at the weekend.

The march, which made its way from Eyre Square to the city’s Spanish Arch, was organised in opposition to Bord Iascaigh Mhara plans for a €100 million salmon farm to be located on a 456 hectare site in the lee of the Aran Islands, a mile from Inis Oírr.

Mr Vigfusson who has dedicated himself to “restoring the abundance of wild salmon that formerly existed on both sides of the North Atlantic”, said the proposed fish farm was not just an Irish issue but a wider EU issue. The Government had a duty to “give salmon smolts safe passage through Irish waters”, he said.

The gathering was also addressed by the mayor of Co Galway Thomas Welby, who called for politicians to “get off the fence” on the issue. Other speakers included Niall Greene of Salmon Watch Ireland, Brian Curran of the Federation of Irish Salmon and Sea Trout Anglers, Derrick Hambleton of An Taisce, Michael Canney of Save Galway Bay, Enda Conneely of the Aran Islands, Martin Kearney of the National Association of Rod Anglers and Independent TD Noel Grealish.

Many of the speakers took issue with a claim by Bord Iascaigh Mhara, reiterated at the weekend, that fish farms result in the loss of only about 1 per cent of salmon smolts. Mr Hambleton told the crowd the authority was being “misleading” in that mortality of wild salmon, due to sea lice from fish farms, was indeed about 1 per cent “in absolute terms”.

But, “with a 90 to 95 per cent mortality rate out at sea due to a wide range of factors, this 1 per cent of total numbers could amount to up to 20 per cent of returning salmon”.

Tommy Casserly vice chairman of Galway Bay Against Salmon Cages asked where the faeces of the salmon were going to go. Mr Casserly said he was part of a group which had restored salmon numbers in tributaries of the river Clare, a tributary of the Corrib.

“Now they want to put a toxic cloud containing seven million caged salmon with all those faeces and chemicals and lice, between the Atlantic and 15,000 wild salmon which come through these waters,” he said.

Later a delegation attempted to hand in a letter of protest to Bord Iascaigh Mhara personnel at a stand at the Skipper Expo in a nearby hotel. However, they said this was refused. Organiser Billy Smyth said it was symptomatic of the authority’s approach, while Mr Vigfusson said he would write a letter of complaint.