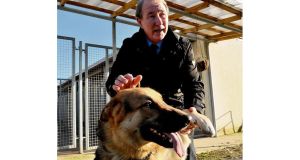 Cork Society for the Prevention of Cruelty to Animals inspector Ted O'Connor pictured with an Alsatian he rescued on Christmas Eve at the society's animals home in Mahon, Cork city yesterday. Photograph: Clare Keogh/Provision

THE RECESSION has led to an increase in dumping of animals, particularly horses, according to officers working in societies for the prevention of cruelty to animals.

Ted O’Connor, inspector with the Cork Society for the Prevention of Cruelty to Animals (CSPCA) said they were picking up as many horses as dogs. “People just can’t afford to keep them [horses] anymore, even hunters now and nice horses. They are leaving them in fields or waste ground.”

Mr O’Connor stressed that not everybody was intentionally abandoning them. He said horses were a way of life with Travellers, for example: “They really love the animals but the unfortunate thing is that they don’t always have a lot of land to put them in to, but they do their best.”

Mr O’Connor said it was a “big responsibility” having a horse. It costs around €100 a week to feed one and if the animal gets sick vet bills can run to hundreds of euro.

Dumping Christmas puppies was no longer the norm, he said. “The children in school are too educated for that; we have a lot of wildlife programmes in the schools and the programmes on the television. And the rights of animals too, they are becoming increasingly respected by people.”

Over Christmas Mr O’Connor and his staff tended animals, including a badger, a swan, an Alsatian, a racing pigeon and a terrier. The badger’s right back leg was broken and it was haemorrhaging internally, so Mr O’Connor had to put it down. “This is common because they are building motorways and roads everywhere without allowing pipes underneath, and the badgers and foxes have nowhere to go.”

Meanwhile, the chief officer for the Kerry Society for the Prevention of Cruelty to Animals, Harry McDaid, said it was receiving daily reports of abandoned and underfed horses and ponies.

A small number of prosecutions were likely, but talks were also taking place with horse owners on how to improve their treatment of the animals. Some owners cannot afford to buy expensive animal feed. The current cold spell is also a factor.

In some cases, the ponies have been so poorly, they have had to be put down, and some are being simply abandoned “down boreens” and remote rural roads.

Many of these animals were bought during the boom, but families could no longer afford to feed them and the meat factories only want horses with plenty of flesh, he said. “For the first time in 25 years, we are getting daily calls and nightly calls concerning hardship to horses.”

Society members who are farm-owners are taking care of some of those abandoned, while the centre is also buying feed for others.

Mr McDaid said while shelter was important for horses during this cold spell, a good horse blanket would suffice, alongside cover where the horse could go, and plenty of feed.

Last year, the KSPCA received about 740 calls about cruelty, a huge increase on previous years.

Ireland facing tough Covid-19 restrictions for first six months of 2021, says Taoiseach 11:50
Police ‘arrest at least 100’ Navalny supporters ahead of Moscow rally 10:50
Covid-19: Hong Kong locks down thousands for compulsory testing 10:49
Badge of distinction: Meet the first Sikh in the Garda Reserves 10:45
One year on: Coming from Wuhan is now a source of pride but many remain wary 10:30