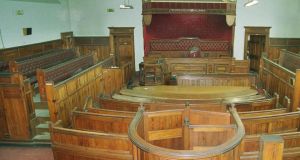 A 46-year-old man who managed the storage and distribution of €1.3 million worth of drugs has been jailed for eight years at Cork Circuit Criminal Court. Photograph: Alan Betson/The Irish Times.

A 46-year-old man who managed the storage and distribution of €1.3 million worth of drugs has been jailed for eight years after a judge heard that he refused to co-operate with gardaí.

Trevor Williamson pleaded guilty to possessing the haul of cannabis resin for sale or supply at two locations on Boreenamanna Road in Cork on September 28th last.

Cork Circuit Criminal Court yesterday, Det Sgt Lar O’Brien said Williamson had refused to assist gardaí with their inquiries despite being given the chance to do so in a safe manner.

Williamson, from Meadowbrook, Heron’s Wood, Carrigaline, told gardaí he feared his wife and children would be shot if he co-operated and gave them information.

Det Sgt O’Brien told the court that members of the Cork City Divisional Drugs Squad received information that a man was travelling from Limerick to Cork to collect the drugs and they put him under surveillance.

They saw him meet Williamson in Mahon Point Shopping Centre and drive then to the Boreenamanna Road where Williamson took the man’s car and drove to a nearby house.

Gardaí watched Williamson and a co-accused, Jerome O’Halloran (59) from St Joseph’s, Boreenamanna Road, load up nine boxes into the car which Williamson drove to a local pub.

There he met the Limerick man and gave him back his car but gardai moved in and arrested both men and found that the car contained 99kg of cannabis worth €594,000.

Gardai then raided the house where they found a further 129kg of the drug worth €781,000, giving an overall value for the combined amounts of €1.372 million.

Det Sgt O’Brien said that he accepted O’Halloran had been asked to store the drugs by Williamson in return for €1,000 and he accepted he may not have realised their full value.

Judge Patrick Moran said that it was a serious offence and Williamson had been managing the drugs after bringing them to O’Halloran’s home some weeks earlier.

He accepted that Williamsont was remorseful and he sentenced him to 10 years in jail but suspended the final two years because of the fact that he has a young family.

He noted that O’Halloran had materially assisted gardaí with their inquiries and he sentenced him to six years in jail but suspended it in its entirety on condition he be of good behaviour.

A third accused, Michael O’Connell (53) from O’Malley Park, Southhill Limerick was jailed for ten years in February for possessing the 99 kg of the drug on the Boreenamanna Road.