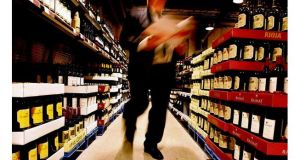 Analysis of figures from the Revenue Commissioners and the CSO show that Irish people are drinking 2.7 litres of alcohol less than they did 11 years ago.

Alcohol consumption in Ireland is down 19 per cent since 2001, new figures show.

Analysis of figures from the Revenue Commissioners and the CSO show that Irish people are drinking 2.7 litres of alcohol less than they did 11 years ago.

Published by drinks industry body the Drinks Industry Group of Ireland (Digi), the figures show that the average Irish person drank 14.44 litres of alcohol in 2001. Consumption levels have continued to fall over the last decade and currently stand at 11.68 litres.

"Between 2007 and 2012, average per adult consumption declined by 12.5 per cent," said author of the study and DCU business school lecturer Tony Foley.

Average per adult alcohol consumption declined again in 2012 compared to 2011. People drank 0.5 per cent less last year than the year before, or a drop from 11.74 litres per adult to 11.68 litres per adult, he said.

The figures were calculated from CSO Population and Migration Estimates for April 2012 and the Revenue Commissioners' 2012 alcohol clearances data. The study methodology defines an adult as "15 years and older".

Digi chairman and Diageo's corporate relations director for Europe, Peter O’Brien, said the drop was due to the weak economy and changing consumer habits.

"Weakness in the domestic economy and the continued pressure on discretionary income are clearly having a negative effect on the drinks sector," he said. "In addition there has been a substantial societal shift…increasingly people are dining out, choosing to enjoy alcohol as an accompaniment to food."

Programmes like the drinks industry-sponsored drinkaware.ie were also promoting the more responsible use of alcohol, he said.

The Government's National Substance Misuse Strategy published last year recommends a ban on alcohol sponsorship of sport, an increase in excise duties and a minimum price per gramme of alcohol.

3:55 From churches to pubs, lockdown restrictions are lifted

FAI board gives green light to League of Ireland restart plan 22:40
Little consolation for dethroned Man City as they thrash Liverpool 22:31
Johnson to stress social distancing rules as pubs and restaurants prepare to open 22:30
Cultural bodies should be ‘wary’ of funding from China, library says 22:15
Coronavirus: Rise in transmission in Ireland sparks concern 22:13