UCD student was in Canada on a summer work programme 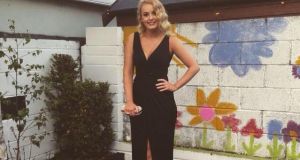 Meaghan Miller (21) was killed in a single vehicle collision in Canada. Photograph: Facebook

A 21-year-old Irish woman killed in a single vehicle collision in Canada has been named locally as Meaghan Miller.

The woman was found dead at the scene north of Maidstone, Saskatchewan on a highway at about 10.30am local time on Wednesday.

She was the only person in the vehicle and the woman’s family have been notified, Canadian police said. The cause of the crash is being investigated by the Royal Canadian Mounted Police..

The young woman was from Malahide, north Co Dublin and was a horse riding enthusiast. She was a past pupil of Malahide Community School, and was studying agricultural science at University College Dublin (UCD).

It is understood Ms Miller was in Canada on a summer work programme, working with horses on a farm.

A spokeswoman for the Department of Foreign Affairs said it was “aware of the case” and was “providing ongoing consular assistance” to the family.