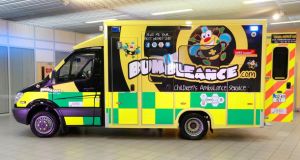 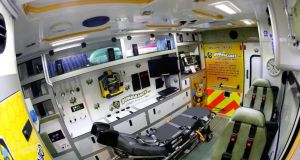 Through their charity, the Saoirse Foundation, Tony and Mary Heffernan developed the Bumbleance after their daughter died in an ambulance.

Having made several trips from the Dingle peninsula to Temple Street children’s hospital and back, the couple wanted to create a child-friendly ambulance to help seriously ill children and their families.

“These kids who will use this have shortened lives,” Mr Heffernan said. “So every journey should be special when you have only got this much time on earth.”

The Heffernan’s five-year-old son is also terminally ill and has less than a year to live.

Outside the ambulance is designed to look like a bumble bee, and on the inside there is mood lighting to help calm the child, as well as colourful imagery and writing with large fonts.

All medical equipment is hidden and from their stretcher the child can control the on board multimedia system, which includes a 19-inch LED TV, iPad mini, Sony playstation, Nabi games tablet as well as a full library of films, e-books and music.

Child psychotherapist at the Solamh Clinic, Joanna Fortune, said giving children this little bit of control can be really helpful.

“When you’re in more control and have more power over a situation immediately you feel better about it,” she said.

Ms Fortune added that the parts of the brain which experience physical pain are the same as those where “we can see stress and anxiety”.

She said if you can eliminate this by providing a relaxing environment, then you “can facilitate a child to arrive in hospital in actually less pain”.

On board WiFi also allows for internet browsing, social media engagement and Skype calls. The Bumbleance can also be GPS tracked through their website and members of the public will also be able to tweet or send messages to the child, who will receive a certificate for completing the trip.

Although the Bumbleance is fully equipped to do so it will not be used for emergency services. Its main function will be to transport children with a long-term serious or life threatening illnesses between their home and hospital.

“This is a very unique environment and we would know the benefits directly from having moved children in a normal ambulance,” said David Hall from Lifeline Ambulance Service, who are providing their services to the charity at cost.

“The relief that this will give for parents for seriously ill children travelling will be immense,” he said, describing the ambulance as a “little playground”.

As demand is expected to be high children will have to meet certain criteria to be eligible and bookings will have to be made in advance. A child’s clinician or treating consultant can refer them to Lifeline or the Saoirse Foundation.

Mr Hall said they are expecting to transport up to 40 children per month in the vehicle, which will be based in the company’s Leixlip headquarters in Co Kildare.

The Bumbleance cost less than €200,000 to develop and at least a further €150,000 will be required to run it on an annual basis. Although the project has been welcomed by the Government it has received no state funding.

Speaking at the launch Minister for Children and Youth Affairs Frances Fitzgerald welcomed the private initiative and said it was interesting the service hasn’t been thought about before.

The Minister added that Government funding for the project “doesn’t arise at present”.

“In an environment where budget wasn’t an issue, clearly you’d like to see this kind of service develop,” she said. “We’re very constrained at present, that’s the reality and I wouldn’t want to pretend anything else.”

Mr Heffernan said he is hoping to have five Bumbleances up an running by 2015, one for each province in the country and another based in Dublin.