Witness recounts death of man on board Aer Lingus flight

Passenger on flight EI 485 says man made ‘guttural noise, like a wounded animal’ 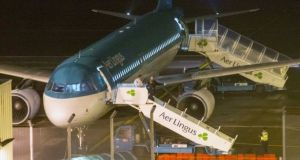 Members of the Garda technical team are seen during the examination of an Aer Lingus flight at Cork Airport on which a man (24) died. Photograph: Daragh Mc Sweeney/Provision

An Irish woman who was flying with Aer Lingus from Lisbon to Dublin on Sunday afternoon has described how passengers felt panicky and very uneasy after a 24-year-old Brazilian man collapsed and later died on board flight EI 485.

The female passenger in her 30s, who requested her name not be publicly released, said the young man, who was sitting three rows in front of her, got up to use the toilet about one hour into the two and a half hour flight.

“He got up while the cabin crew were at the end of my row giving out tea and coffee,” she told The Irish Times. “He got very distressed when he couldn’t get past and ended up climbing up on the seats to get past the crew. He wasn’t speaking at all and looked really unwell,” she said.

Two male passengers encouraged the man to step down from the seats before he made his way down the aisle to the toilet at the back of the plane, she said. A few minutes later a Portuguese woman sitting across the aisle who “spoke very good English” made her way down the aisle to check on the man in the bathroom.

“She told me later she had spoken to him in the airport,” said the passenger. “She went to check and didn’t come back.”

A short time later the captain made an announcement over the intercom asking if there was a medical professional on board the flight. It is understood a male doctor and female nurse presented themselves to the crew and made their way to the back of the plane.

“Everyone was like, ‘oh that poor young man’. We said ‘God help him, he must be travel sick’. All I was thinking was ‘bless him, walking back up the aisle to his seat from the bathroom feeling mortified’.”

As information began to filter back through the plane it became clear the man had collapsed outside the bathroom, according to the female passenger, who was sitting halfway down the aircraft.

Shortly after, the captain made a second announcement that the flight would be making an emergency landing in Cork Airport due to “a medical emergency”.

“At that stage they started to perform CPR,” she said. “You could hear him start to... well, screaming isn’t quite the word. It was a guttural noise, like a wounded animal.

“That was quite scary, I realised it was much more serious than I’d thought.”

Speaking to Cork’s 96FM on Monday morning, a male passenger described how he saw the Brazilian man “shaking violently” as he suffered what appeared to be a number of seizures.

“The noise he was making was like something that I’d never heard before and wouldn’t like to hear again,” she said, also describing the sounds as “guttural”.

“It was like a deep anguish, that is the best way I can describe it. It was very, very troubled,” he said.

The female passenger told The Irish Times a second Portuguese man, who also spoke English, made his way down the plane to see if he could assist in any way. She said this was the man who was reportedly bitten on board the flight.

“The young Brazilian man was having a seizure and they were all restraining him. It wasn’t a random attack. He bit him during the seizure.”

The flight landed in Cork at about 5.40pm where paramedics boarded from the back of the plane. The man who had been bitten was taken to Cork University Hospital (CUH) where he was treated for his injuries. By this point a curtain had been erected to separate passengers from the young man, says the female passenger.

He was pronounced dead by paramedics soon after their arrival and his body was removed from the airport to CUH.

After a half hour of waiting in their seats, passengers were told the flight would be delayed by a couple of hours before leaving for Dublin. A few minutes later another announcement informed them that buses would be provided to bring them back to Dublin.

“We waited on the plane for two hours but no one minded. Everyone was sitting there saying we can wait. People were just concerned. At that point we had all guessed he was dead,” the female passenger said.

“It was 7.30pm when we got off the aircraft. There were gardaí at the top of the plane checking our boarding passes and names.”