Why Irish artists are on the breadline 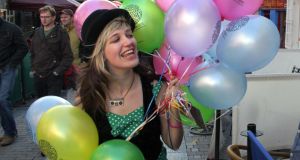 Jojo Hynes: ‘If it wasn’t for the support and encouragement of peers, friends, family and my community, I don’t think there is any way I would still be an artist.’ Photograph: Joe O’Shaughnessy

When Galway artist Jojo Hynes and several accomplices were caught trying to break into the Bank of England for a crowdfunding video, the security officer on duty may not have realised how desperate they were.

Hynes and her colleagues teeter on that tenuous “periphery” which President Michael D Higgins identified at the Aosdána assembly last month when he criticised the 40 per cent cuts in funding for the arts.

Financial support for the sector is as important to our infrastructure as “roads, hospitals and schools”, Mr Higgins said, and it was time to “release ourselves” from the “myth” that “artists thrive below the breadline”.

Hynes believes it is time artists spoke up about those realities and the challenge of juggling creativity with a series of often poorly-paid casual jobs.

Nationwide surveys of artists’ incomes conducted by Visual Artists Ireland present a bleak picture. Some 67 per cent of respondents earned less than €10,000 annually from creative work in 2008; this had risen to 83 per cent by 2013.

“I think it is time we all spoke very openly about this,” Hynes says. People may not be aware, for instance, that artists often have to pay for their exhibition space, in addition to hosting costly openings.

“If it wasn’t for the support and encouragement of peers, friends, family and my community, I don’t think there is any way I would still be an artist,” she says.

With her roots in and around the north Galway creative hub of Tuam – home to writer Tom Murphy, the Saw Doctors and Earwig Arts Festival founder Midie Corcoran – she studied fine art in the Galway-Mayo Institute of Technology and community art at Dublin’s National College of Art and Design.

As former visual arts director of the Tuam Arts Festival, and affiliate of Galway’s Artspace Studios and 126 Gallery, among others, she has exhibited extensively and won several awards. She is currently with London-based jazz art band Triangular Brush.

“We have likened ourselves to a band of musicians where we each have the freedom to explore our own ideas and to play very different-sounding ‘instruments’, while at the same time being able to enjoy coming together to create a temporary atmosphere,” say Hynes and affiliates Annelie Fawke and Joanne Newman.

The trio have already secured the venues for their “concert of art works” in the Hungarian capital on May 8th, an exhibition in Kosovo’s marble cave of Gadime in September and a one-night event in Galway in October.

As part of the tour, they have also booked the “ArtsLav”, the former Victorian “gentlemen’s convenience” at London’s Kennington Cross which is now a thriving community arts space; they intend to wrap it in plastic.

While crowd-funding has created an alternative at a time when institutional budgets are squeezed – and Hynes and company are delighted for the votes of faith in their work – it is an increasingly competitive and unreliable space.

Hynes is well aware that this struggle is not exclusive to artists, but affects everyone in the creative sector – apart from those who have hit gold in the so-called digital space or those guaranteed income in film.

She has been following how academics are also affected, be it through lack of State funding for research that cannot be linked directly to “job creation” or the casualisation of work in various third-level institutions.

The current “Postcards from the Periphery” campaign led by the Third Level Workplace Watch (3lww) collective maintains that casualisation of labour in higher education and cuts to research budgets is “eroding academic freedom” .

“Follow your heart, be part of a creative community that is indomitable, don’t sacrifice your power because the Government needs worker drones to pay their pensions,” Little John Nee wrote. “Yes, there will be trouble. Make art because you can . . . because if you don’t the zombie flesh-eaters will win, and their plan to create an island of the living dead will be fulfilled . . . ”

Covid-19 Vaccine Tracker: What's available in the Republic of Ireland and what else is coming? 16:53
Insurance firms may cut motor premiums this year 16:44
Committee told meat industry will continue to need workers from abroad 16:40
Covid-19: Major change to vaccine rollout planned amid expectations AstraZeneca will be limited to over 60s 16:04
Two who challenged hotel quarantine awarded their legal costs 15:32