Who are Ireland’s newest multimillionaires? 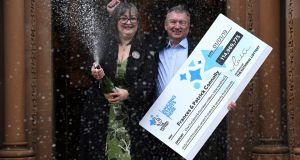 She is from Glebe in Co Tyrone and he is from Belfast. They met at a wedding in 1989 and have been together for 30 years.

They spent 25 years working in Hartlepool, in Co Durham, and recently returned to a rented property in Moira, Co Down.

Mr Connolly ran a small business at one stage before going on to work for others. His expertise is in manufacturing.

Mrs Connolly worked as an educational programme co-ordinator and plans to do a PHD in clinical psychology.

They have three grandchildren, two boys and a girl, and three daughters, one aged 30 and twins aged 24.

One twin is in New Zealand doing a Masters degree. She will be travelling home and, during her stopover, has upgraded from a hostel to a modest hotel, her mother said.

Mr Connolly paid tribute to his “wonderful” wife and family.

He said they had never lived an overly extravagant lifestyle, joking that could be about to change.

He said he was retired for now while he decides what to do in the future while his wife said: “I am retired — 100 per cent.”

They said they wanted to focus on charitable work in the future, on job creation and doing good deeds.

Mrs Connolly would not disclose details of those they would be helping but promised to create some more millionaires in a list of 50 people who will benefit from a share of their winnings.

“The pleasure for me will be seeing their faces and asking what they want us to do for them.”

Mrs Connolly said at the press conference on Friday: “I am going to cry myself to sleep that I cannot help everyone, that will be really tough.”

Mr Connolly is a businessman who once ran his own firm. He predicted he would not be able to sit around long before he had to get back to doing something.

He said his expertise was in manufacturing and he hoped to create more jobs using part of their fortune.

They said they were hard-working people who did not carry a lot of debt and did not indulge in luxuries before their win.

Mrs Connolly said she would get pleasure in seeing the telephone number-sized amount in her bank account go down. Mr Connolly said: “We are quite level-headed people, we are not overly extravagant — yet.”