What will private hospitals do for us in the Covid era partnership? 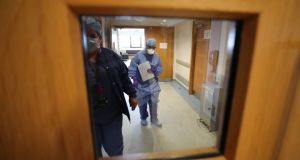 “We feared Armageddon,” says Debbie O’Neill, the clinical nurse manager of the intensive care unit in the Blackrock Clinic. “One of my colleagues put it very aptly; she said she felt she was standing on the beach, with her back to the wall, and could see the tsunami [coming].”

Whatever else it is, the Blackrock Clinic on a Thursday afternoon in early May does not feel like Armageddon.

Theatres and wards are sparsely populated, although not empty. Under the new deal with the State, and rigorous Covid-era infection control guidelines, occupancy is down to 45 per cent, far below the usual 80 and 90 per cent.

Everything was based on fears that the State would have a fifth of the ICU beds it needed, framed against the backdrop of footage emerging from Italy and Spain, of makeshift ICU beds in hospital corridors as doctors battled with air disaster-style numbers every day.

For Margaret O’Donnell, a plastic surgery consultant at the clinic, and its director of clinical governance, the atmosphere at the time was one of “national emergency – shoulder to the wheel; what do we have to do”.

Under the deal, the Blackrock Clinic was detailed to “decompress” the public system – to carry out complex and pressing surgeries that could not be done in public hospitals. Since then, it has done 400 cancer surgeries, along with cardiac and other urgent procedures.

In a second phase of the plan, Blackrock would have taken in Covid patients. However, the surge, and the associated pressure on Irish hospitals, never came, or at least not to the same extent as elsewhere.

Now, as the country faces months – perhaps years – of living with Covid-19, critical questions are being asked about how the healthcare system can operate. For all parties, the issues are multiplying, and there are no easy solutions in sight.

O’Donnell says her predecessor, Prof Gregor Shanik, had a term for conundrums like this. He called them “wicked problems”. As it faces into an era of seismic and unpredictable change, how will Irish healthcare solve its wicked problem?

Launching the agreement, Taoiseach Leo Varadkar said private hospitals were not being nationalised. The move, he said, represented a “public-private partnership” for the common good. However, the Government has faced calls to do precisely that.

There is not a lot of time to decide, as a confidential joint HSE/Department of Health paper given to the National Public Health Emergency Team last week made clear pointing to the scheduled end-May contract review.

Such a review will assess the agreement’s effectiveness in supporting the public system set against prevalence of the disease. Pointedly, it said Minister for Public Expenditure Paschal Donohoe would be responsible for approving any extension, given the costs involved.

Some senior health figures believe a review at the end of May comes too quickly. It should assess the delivering of Covid and non-Covid care in public hospitals. Care should be given, too, to all those patients who have not contracted the virus, but who have had their own treatments delayed.

According to the paper, private hospitals “will be used in support of the resumption of more routine scheduled care in order to tackle the increasing waiting lists for such care”. It said this “may be dependent on the decision on whether or not to extend the arrangement”.

Inside the Department of Public Expenditure and Reform, however, the goal is to find a way of keeping costs under control while keeping access that may be needed in the event of a future surge of the virus.

Options could include, for example, a “less demanding” version of the current deal that would retain flexible access to ICU beds, or the National Treatment Purchase Fund (NTPF) could be given a greater role. The aim may be to extend, but with lower capacity, and less cost, sources say.

Alongside surge planning, Covid-19 will also have a profound impact on the Irish health system. Patients will be processed more slowly, infection controls will be more onerous, affecting the speed at which everything can be done.

The HSE/Department of Health paper said private hospitals will be used to support the resumption of routine, but delayed scheduled care to tackle longer waiting lists. The paper said this “may be dependent on the decision on whether or not to extend the arrangement”.

The HSE has to inform private hospitals by May 31st on whether it intends to extend the agreement to July 30th. If it does decide to extend until July, then either hospitals or the HSE can subsequently terminate the arrangement with 30 days’ notice.

For consultants temporarily relocated to the Blackrock Clinic, the sense is things aren’t going back to normal. As she prepares to go into theatre, gynaecological oncologist Dr Noreen Gleeson, normally of St James’s Hospital, says: “I think things will never go back quite to the way they were on account of Covid; I think it will be with us for a long time and we will have to work our health systems around it.”

A decision by the HSE to extend the deal until July will impact on everyone in the health system. The private hospitals are making their position clear.

Michele McCormack, the Blackrock Clinic executive, is forthright. While she is committed to the deal, and providing capacity if needed, once it is concluded, she is adamant the clinic “will return to its normal business as before”.

The Private Hospitals Association (PHA), the industry group for the sector, is also sending a clear signal to the Government. In a statement to The Irish Times, a spokesman said the deal was “the right decision for that time”, but added that while private hospitals are getting busier, activity levels depend on cases being sent to them by the HSE. “If these do not increase, it may be preferable at a point to revert to the NTPF model whereby services and elective procedures can be procured and contracted based on precise levels of demand at any given time and thereby delivering better value for money.”

The deal has cast a shadow over the business model of the institutions, but also over medical consultants and insurers. Private healthcare is a €2 billion industry in Ireland, employing thousands. Nearly 2.276 million people had in-patient insurance at the end of last year.

Medical consultants receive about €600 million collectively from the private system. Senior figures in the sector say that about 30 specialists receive more than €1 million, although this is not just salary – private medical practices can be micro economies employing technicians, nurses, business managers. Some specialists purchase suites in private hospitals, costing from several hundred thousand euro to more than €1 million.

Fears such practices could become unviable form part of the objections to the Government’s public contract, on a salary of between €141,000 and €195,000. Some 320 of the 600 fully-private sector consultants have signed up. The Department of Health last Friday told doctors it would not offer them a contract that allowed them to charge fee-paying patients. Essentially, they could take or leave what is on the table.

Some doctors have argued that the original basis of the agreement was to have capacity to deal with the pandemic, not to tackle public waiting lists. They argue the State has used the NTPF to buy care for patients on waiting lists without ever having to take over hospitals or to make doctors employees of the State.

Doctors are concerned about the fate of their existing private patients. Already there are murmurings of legal action.

Insurers have seen their business model disrupted as subscribers lost access to the private hospitals. Private maternity, psychiatry and diagnostics are still available as are some out-patient consultations and procedures, but insurers have introduced premium waivers, cashback arrangements and rebates for customers.

There are concerns that if the State takeover of private hospitals continues, for example, into the autumn that a question about the “relevance” of insurance cover will arise. Already, the industry is bracing for a fall in subscribers, as the recession bites.

In a Covid-19 world, the way forward is far from clear. It is a densely interwoven patchwork of financial, logistical, tactical and strategic questions, shot through with ethical and philosophical dilemmas, not to mention the vested interests and turf wars common in Irish healthcare.