What can you buy with an €88 million EuroMillions win? 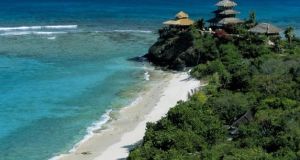 The EuroMillions could consider a holiday to the Caribbean island of Necker, which costs around €74,000. Photograph: Getty 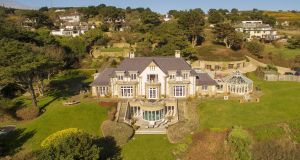 Danes Hollow - once the home of the Riverdance duo of Moya Doherty and John McColgan has five massive bedrooms and can be yours for €9.5 million. 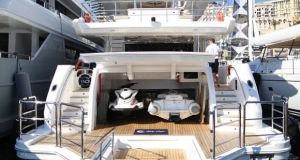 A jetski and a rigid-inflatable boat are stored on the rear deck of the ‘Majesty 110 super yacht’, which was on Monaco yacht show last year. Super yachts typically cost around 10 per cent of their purchase cost each year to maintain and operate. Photograph: Getty

The first thing Ireland’s newest EuroMillions winner is likely to want to do is take a holiday and where better to do that than on the Caribbean island of Necker.

Owned by Sir Richard Branson, the island has room for 34 people, looked after by staff of 100.

Necker rents for €74,000 a night so a two-week break for the winner and a chosen few of their friends will cost the guts of €1 million.

Although the winner might have to wait until former US president Barack Obama and his family leave, as that was their destination as soon as they left the White House.

After the little break, the winner will need to find somewhere swanky to live. And when it comes to swanky in Ireland right now it doesn’t get swankier than Danes Hollow in Howth.

“Situated in the exclusive and highly sought after enclave of Baily, county Dublin the property not only enjoys panoramic views and immaculately landscaped terraced gardens, but ease of access to the city of Dublin, the international airport and beyond,” or at least that is what the estate agent says.

They have clearly never tried to get out to Howth on a bright summer’s morning when half of Dublin is trying to get to Dollymount.

Danes Hollow - once the home of the Riverdance duo of Moya Doherty and John McColgan - only has the five bedrooms, but they are massive, as indeed are all the reception rooms and the kitchen and the gardens.

And of course there’s the swimming pool, which looks pretty big too.

At €9.5 million, the EuroMillions winner will have plenty left over after buying their new house. They could also buy a secondhand Lear Jet for around €2.5 million.

Next on the shopping list might be a luxury yachts, although we’d caution against such a purchase, even with €88 million burning a hole in your wallet, as a really good yacht will cost at least €50 million and comes with enormous running costs.

According to people who think about such things as part of their day-to-day business, the owner of a fancy yacht can expect to pay around 10 per cent of the purchase price each year on running costs along, so if the winner does buy a €50 million boat all their money will be gone in less than a decade.

Granted, they will still have their boat, but they won’t be able to sail it.

If you want to experience life as a billionaire then you could use some of your winnings to rent the Serene Yacht which costs about €1.5 million a week. Bill Gates and his type have been known to rent it.

Perhaps a better investment for a winner who wants to be near the water might be your very own Greek island.

Dulichium, is the largest private island for sale in Greece right now and could be yours for about €40 million, although you’d probably need to build some manner of house on it which would add to the costs.

If the winner is a football fan, they might like to buy a professional player to play keepy-uppy with in their garden.

Sadly, the likes of Ronaldo, Gareth Bale - or even Paul Pogba - will be out of reach so they might have to settle for a lesser light like Luis Suarez. Barcelona might bite a buyer’s hand off it they came up with that sort of fee.

Championship clubs are out too so the winner will probably have to go all the way down to League One - which is the very old Third Division.

Tickets for Richard Branson’s Virgin Galactic are available for around €230,000 so you could take yourself and 384 close friends on a two-and-a-half hour journey 90kms above the Earth to see what it’s like to vomit in zero gravity.

Or you could give some of the money away.

The cost of immunising children against most of the life-threatening illnesses in poor countries costs around €25 so the EuroMillions winner could still afford to vaccinate more than three million children in impoverished countries and still have €8 million left over to play with.