Westport House talks are at a ‘delicate’ stage, Ring says 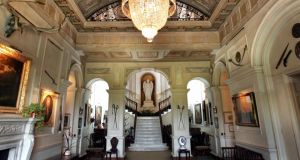 Minister of State for Tourism Michael Ring has said negotiations between the National Asset Management Agency (Nama) and Mayo County Council on the future of Westport House remain at an “advanced” and “delicate” stage.

Mr Ring expressed “surprise” at the decision of the owners, the Browne family, to put it up for sale this week with a guide price of €10 million.

The 18th-century mansion and its 183 hectares (455 acres) comprise one of the most important tourist sites in the west, offering a wide range of visitor attractions.

Mr Ring said the State had a “hold” on the house valued at €2 million through the Department of Arts, Heritage and Gaeltacht.

This relates to Heritage Council grants paid to the house since 1999 for works such as a new roof.

However, a source close to the owners said the conditions attached would be discharged within several years.

Mr Ring, who is based in Westport, was instrumental in ensuring loans on the house were withdrawn from a portfolio sold by Nama to US investment company Cerberus last year.

Some 380 acres of the estate were put up as security on a loan of €6.5 million taken out by Lord Altamont in 2006 as part of plans for further development.

Amid local fears about the impact on tourism if the house and estate were broken up or sold, the baton was taken up by the council, which opened negotiations with Nama with a view to acquiring the loan, amounting to €9 million with interest last year but valued now at €1 million.

Speaking on Midwest Radio, Mr Ring said these negotiations were still at an advanced stage and the Western Development Commission (WDC) was also involved.

Nama said its engagement with the council was continuing. WDC chief executive Ian Branigan said the commission was “happy to review any matter that furthers the interests of regional tourism and cultural offering”.

The Browne family said it had received no direct approach from the Government or the agency, and had postponed a sale last year as it hoped the Government would still “step in”.

Sheelyn Browne said the family had taken the decision to sell “sadly and reluctantly” on the advice of High Court administrators for “legal and financial reasons”.

“Our fervent hope and wish is that someone will buy the house and estate and keep it open to the public so that it can continue to be the cornerstone of the tourist offering in our beloved Westport,”she said.

The Irish Georgian Society said “every effort should be made to ensure a positive outcome of discussions” so that “the future of the estate as a whole, including its collections, is ensured for Mayo and the nation”.

An Taisce heritage officer Ian Lumley called for a “co-operative solution” between the Browne family, Nama, State heritage and tourism agencies and the council.