Warning Ireland will not achieve renewable energy targets without wind 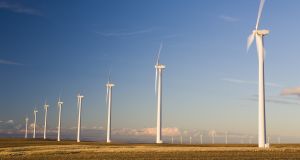 The Irish Wind Farmers Association said Ireland was well positioned to capitalise on its location at the western edge of Europe to rely on wind energy. Photograph: Getty Images

Ireland’s lack of a detailed policy plan for wind energy means the country will end up “back-sliding” on its targets to such a degree it will not achieve a 100 per cent renewable energy system by 2050, a leading figure in the wind energy sector has warned.

Grattan Healy, chairman of Meitheal na Gaoithe or the Irish Wind Farmers Association, said that Ireland was well positioned to capitalise on its location at the western edge of Europe to rely on wind energy instead of fossil fuels but it was failing to do so.

“Ireland’s ‘Energy policy’, or lack thereof, as reflected in the “very vague” White Paper and various moves at EU Council level by Ireland to “water down” the Clean Energy Package, run totally contrary to what the general public, consultants, developers and others want,” said Mr Healy.

“Ireland is almost uniquely placed to produce any amount of energy from wind to power the whole country and up to half of Europe. Yet we seem intent on throwing every possible obstacle in our own way and spending €6 billion a year on imported fossil fuels.”

Speaking in advance of the Irish Wind Farmers Association Annual Conference in Kilkenny on Wednesday and Thursday, Mr Healy said the Government’s failure to properly promote wind energy was having a detrimental effect on rural communities which could benefit from such a policy.

“A single wind turbine has the potential to generate tens of thousands of euros for a rural household per annum - the equivalent of another family income,” said Mr Healy whose organisation promotes the development of small to medium scale energy projects by individuals and communities.

“By failing to fully develop onshore wind, this is foregone money which could be pumped directly back into the local and regional economy, saving our rural post offices, shops, creating employment and more in some of Ireland’s most disadvantaged rural communities.”

According to Mr Healy, Government policy makers seem “to be intent on pandering” to a small percentage of the population opposed to wind energy and are intent on scaremongering rather than engaging in a meaningful way with communities about the benefits of wind energy.

He said Ireland must invest in information campaigns and meaningful discussions about wind energy and “stop the misinformation and scaremongering”.

Mr Healy said the association believes that Ireland urgently needs a proper electricity market design, which is ‘for’ and not ‘against’ renewable energy. He also said that many in the industry see the European Union as being hostile towards the wind energy sector.

“Very specific, positive and excellent demands were made by the Citizens Assembly for action in this sector but the prevailing policy seems to be more focused on paying fines rather than taking action,” said Mr Healy who will welcome delegates to the conference at the Lyrath Estate on Wednesday evening.