‘To many of us Terry was Radio 2. We still can’t believe it’ 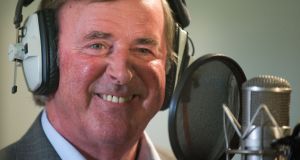 BBC presenter Terry Wogan, host of Britain’s flagship television chatshow in the 1980s and of Eurovision over three decades, died of cancer on January 31. Photograph: Getty

Many other tributes have been paid to the the Limerick-born radio and TV veteran by media friends and colleagues.

President Higgins said Wogan’s was one of the best known voices in Britain and Ireland.

“People in Ireland will remember his early career in Irish broadcasting. On his move to Britain his voice became one of the most often quoted, favourite radio voices,” he said.

“Always proud of his origins in Limerick, he made many returns to his native country for television and radio projects.

“His rise to the top of radio listenership in the United Kingdom was a great tribute to his breadth of knowledge and in particular his unique, very personal sense of humour.”

Taoiseach Enda Kenny said Wogan, as an Irishman, occupied a special place in British listeners’ hearts and acted “in no small way as a bridge between Ireland and Britain”.

2/2 I grew up listening to him on the radio and watching him on tv. His charm and wit always made me smile.

British prime minister David Cameron said Britain had lost “a huge talent - someone millions came to feel was their own special friend”.

“I grew up listening to him on the radio and watching him on tv. His charm and wit always made me smile,” Mr Cameron tweeted.

Wogan had a 50-year career on television and radio. Starting on Radio Éireann, he went on to present Wake up to Wogan on BBC Radio 2 and the Wogan chat show. He was also the voice of the Eurovision on the BBC for more than 30 years.

Chris Evans, who took over Wogan’s breakfast radio show, said “we are all so terribly sad upon hearing of the passing of Terry. I can’t put into words how the whole Radio 2 family is feeling.

“Our most heartfelt thoughts go out to Helen, Mark, Alan, Katherine and Vanessa. To many of us Terry was Radio 2. We still can’t believe it.”

Gay Byrne also paid tribute, saying Wogan was extremely well read. “He had a good grounding in Shakespeare and poetry and all that sort of thing and he maintained that interest throughout his life and that stood to him.”

TV host and radio presenter Graham Norton said: “He made it seem effortless and for a young boy in Ireland he made it seem possible. RIP Sir Terry Wogan. I’ll raise a glass during song 9”.

Broadcaster Paul Gambaccini paid tribute to Wogan, saying he was “a giant of our profession... a man who could make the changes that had to be made wih the times”.

Sky presenter Eamonn Holmes said “Dublin was very much part of Wogan’s life although he was born in Limerick”. He added that if, as a young Irish broadcaster, you got Wogan’s blessing it was a “marvellous, marvellous thing”.

Holmes referred to Wogan as “the don” and said that one of his favourite things about him was his lack of discretion. “He was so indiscreet,” Holmes said. “He gossiped about everything”.