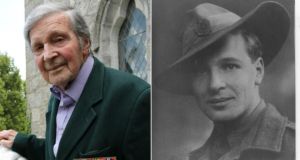 Francis Bailey says the war “was not a piece of history for me. It directly affected my life.”

Francis Bailey joined the Royal Engineers in England after the Luftwaffe bombed him and his family out of their home in Birmingham.

Born in October 1923, he was shipped to India and from there to Burma where his unit was involved in the construction of pontoon bridges for the British army.

He spent his 21st birthday in the jungles of Burma. While constructing a base hospital in Rangoon, he came down with a tropical disease and was invalided to India.

After three months of travelling around India, he heard through the grapevine that his unit had been moved to Singapore. When he got there, his friends exclaimed “we thought you were dead a long time ago”.

After the war he became an architect. He met his wife Patricia Egan while working in New Zealand. She was second-generation Irish and they moved to Ireland in 1969. They had five children and have been living in Dalkey since.

Mr Bailey (91) stresses that he was just an “ordinary soldier”, but the war “was not a piece of history for me. It directly affected my life.”

When the bombs were dropped in Hiroshima and Nagasaki in August 1945, he argued with his comrades in arms that it was wrong. It is a view he hold to this day, articulating it again in a letter to The Irish Times last week.

“I’m not a pacifist. We have to defend what is worth defending, but there are limits to which one should go,” he explained.

“I can’t understand why the Americans could not have dropped the bomb on a desert island as a demonstration instead of killing hundreds of thousands of people. I can’t reconcile that.”

For Kerryman Maurice O’Connell, VJ Day is a “quite extraordinarily complex, delicate and sensitive issue”.

He was a five-year-old boy in Singapore when the Japanese began bombing the British colony in 1941.

His father Basil was Commandant of the Police Training Depot in Singapore.

When the Japanese began their assault on Singapore in November 1941, his mother was pregnant with his brother Seamus.

The family were evacuated. His father stayed on and ended up being interned in a Japanese prisoner-of-war camp.

Maurice and his family made it back to Ireland from Sumatra, Sri Lanka, South Africa, Liverpool and then finally Dun Laoghaire.

Eventually, they got home to Cloughjordan, Co Tipperary, with 27 pieces of luggage.

Mr O’Connell said he found it strange that nothing was being done to remember VJ Day in the south given the number of Irish people who were serving overseas at the time.

“The official view in Dublin appears to be that there was no World War II and that consequently no Irish citizen, military or civilian, could have been involved,” he says.

“With the late Eamon de Valera, I appreciate the niceties of the neutrality of the Irish Free State and even the relative comfort, peace and quiet of the Emergency. Which I enjoyed myself.

“However, for a significant number of Irish citizens, (and their descendants or relatives), the actual situation was somewhat more complicated. It would have been nice to have had a discreet semi-official occasion.”

Veronica Heywood will remember VJ Day with veterans and the children of veterans at The Club in Dalkey on Saturday.

Her father Graham Heywood’s journal of his time in a POW Camp will be published next year.

A civilian, he was one of the first to be captured by the advancing Japanese army when they invaded Hong Kong in December 1941. He was at the time a meteorologist and astronomer working at the Royal Observatory, Hong Kong.

His daughter has been living in Ireland since 1968. “One forgets it is my father. His account is gripping,” she said. “The worse part of it was starvation and being badly fed. The Hong Kong Chinese were incredibly brave in passing things through the fences. They were generous and brave and helpful.”

Fianna Fáil leader Michéal Martin had an uncle Philip who was captured at the Fall of Singapore in 1942.

Earlier this year, Mr Martin told The Irish Times that his own father Paddy was deeply affected by Philip Martin’s experiences in the notorious Changi prison camp.

“When the queen attended Hirohito’s funeral (in 1989) he (Paddy Martin) got angry about that. My Dad would not normally be interested in what the queen of England might do. He said to me that Philip would turn in his grave. I found that strange coming from my father,” Micheál Martin says.

“Dad was very proud of Philly. The fact that he did three years with the Japanese was very tough going.”

Husband of Jean Eagers charged with her murder 06:33
BT Young Scientist & Technology Exhibition to go virtual in 2021 06:00
Researcher contracts under strain as economic recession looms 06:00
One-meter rule means all students may not return to school in September 02:46
Open Ireland as soon as possible - Tourism chief warns of 'catastrophic' impact of pandemic 02:39

1 Full line up of junior ministers unveiled as Taoiseach accused by one TD of snub
2 Bobby Storey: The IRA's planner and enforcer who stayed in the shadows
3 Who are the new junior ministers? All their profiles are here
4 Open Ireland as soon as possible - Tourism chief warns of 'catastrophic' impact of pandemic
5 World, look away now – these are dark days for the United States
Real news has value SUBSCRIBE