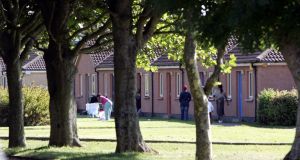 Management at the direct provision centre at Mosney in Co Meath is to contact a voluntary homeless organisation after a van delivering toys and clothes was turned away from the former holiday camp on Friday.

Inner City Helping Homeless (ICHH) said its mobile outreach unit attempted to deliver leftover Christmas shoeboxes put together by members of the public to the children in the centre after it made an arrangement with staff there. It said items had been delivered there before Christmas “without any issue”.

“This morning security refused to allow our van to deliver these items that were intended to give the children living in direct provision something to smile about,” said Anthony Flynn of ICHH.

“Our van is marked with all of the ICHH details and we are a registered charity, however none of this mattered to security who claimed we could have had someone hidden in the back of the van.

“Our driver allowed them to check the back of the van and advised that this was prearranged, however they refused to budge. At this point the lady that had made the arrangements came to the gate and begged the security to allow the shoeboxes in for the children but they completely refused.”

Mr Flynn said the refusal to allow the van in was “bureaucracy at its absolute worst” and he urged State officials to follow up the matter.

“This was two to three weeks in the pipeline. We have a contact in Naas. He’d engaged with the staff at the direct provision centre. He’s going to attempt to go back on Monday with the stock. There’s an engagement between us and the staff there.”

He said the van was “full of toys and clothing, all brand new stock” and that people had, on a voluntary basis, given over two days putting it together.

“I’m sure the staff on site had probably told the children this was on the way,” Mr Flynn added.

A spokesman for the Department of Justice said the Mosney accommodation centre welcomes support for its residents and has a long track record of encouraging that support in the community.

He said accommodation centres for international protection applicants are “governed by strict rules to ensure they meet their obligations under the law to protect the identity of residents”.

He said Mosney had informed the department that “while they regularly welcome deliveries of this nature, on this occasion the centre was not notified beforehand which meant it could not be cleared by security”.

The spokesman said management at the centre would contact ICHH to re-arrange the delivery of the presents and thank them for their support.

The centre opened in December 2000 has just under 700 people living in it, according to latest figures. According to the Reception and Integration Agency the contractor for the Mosney direct provision centre was paid €123.5 million by the State from 2000 to the middle of 2016.