Up to 115,000 Irish users on Ashley Madison affair website 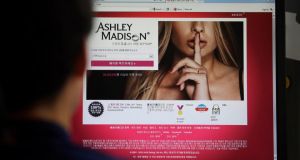 Ireland is ranked as having the highest number of members on the cheating site in Europe with the exception of Switzerland (3.9 per cent) and Spain (2.7 per cent). Photograph: AP Photo/Lee Jin-man

A hacked website for married people who want to have an affair has in the region of 115,000 Irish members, according to figures published by the company.

Avid Life Media (ALM), the parent company for dating websites Ashley Madison, Cougar Life, and Established Men, said in a statement on Monday it had been the subject of an “act of cyber–terrorism”.

A group calling itself The Impact Team infiltrated the company’s systems and posted a statement which claimed it had complete access to the company’s database of members, as well as financial records and other personal information. It threatened to publish the information online unless the site closes.

A statement from the group said: “We have taken over all systems in your entire office and production domains, all customer information databases, source code repositories, financial records, emails.

“Shutting down AM [Ashley Madison] and EM [Established Men] will cost you, but non-compliance will cost you more: we will release all customer records, profiles with all the customers’ secret sexual fantasies, nude pictures, and conversations and matching credit card transactions, real names and addresses, and employee documents and emails.”

ALM chief executive Noel Bidernman confirmed the breach and said the company was “not denying this happened”.

The Ashley Madison website, which carries the tagline “life is short, have an affair”, is designed to facilitate extramarital affairs, and has a worldwide membership of almost 38m.

Following queries from The Irish Times in relation to Irish membership, a spokesman for ALM said he had “no information on your specific questions at the moment”.

Figures released by the website in 2011 said there were more than 40,000 Irish members. However, a graphic called “the global infidelity map”, published on the website’s Twitter account a fortnight ago, outlined its per capita membership in countries around the world. It indicated that 2.5 per cent of the Irish population were members, which equates to approximately 115,000 individuals.

The data showed Ireland ranks tenth in a list of 45 countries that have members. Canada (6.7 per cent), the United States (5.2 per cent) and Australia (5.1 per cent) have the most members per capita, but Ireland is ranked as having the highest number in Europe with the exception of Switzerland (3.9 per cent) and Spain (2.7 per cent).

The statement from ALM said it “apologised” to members for the “unprovoked and criminal intrusion” into their information.

The website offered an option of a “full-delete” of data for a fee of $19 should a user choose to leave the service permanently. The group of hackers however claimed that many details are never deleted.

In a subsequent statement, the company said it “does in fact remove all information” and added it would waive the fee for any member wishing to avail of the option “in light of today’s news”.