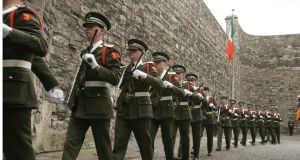 Members of the Cadet Honour Guard after a wreath laying Ceremony in the Stone Breakers’ Yard at Kilmainham Gaol as part of the Commemorations to mark the 90th Anniversary of the 1916 Rising. Photograph: Alan Betson

No programme of events to mark the centenary of the Easter Rising have been sent for consideration to the expert committee advising the Government, its chairman has said.

Dr Maurice Manning said the expert advisory group had been impatient for a while about the failure to bring forward a blueprint for marking the centenary of the Easter Rising which occurs in just 18 months time. “It is time for things to happen,” he said.

Historian Professor Diarmaid Ferriter, who is also on the committee, wrote in his Irish Times column yesterday about complaints from relatives of the 1916 combatants who said they were being kept in the dark about plans for the Rising centenary.

He added: “Members of the Government-appointed expert advisory group on commemorations, myself included, have repeatedly asked for concrete information on what the plans are and we have been stonewalled.

“Either those plans do not exist, or they are an even bigger secret than were the plans for the Rising itself.”

Dr Manning said he had been told by the Taoiseach Enda Kenny as late as last week that concrete plans will be made available in the near future.

Dr Manning had previously written to the Taoiseach seeking clarity on what is happening with the Easter Rising centenary.

“We’ve been assured that they will be out in the very near future and this time we take the assurances seriously but we are impatient,” he added.

“We would like to see things moving ahead and specific items being put out there for discussion.”

Dr Manning urged the Government to put their plans in the public domain as soon as possible so people could have their say. “We need to put a plan out there. It doesn’t have to be the last word, but at least people will be able to engage with it over a specific period of time and get moving.”

The Government last week allocated €4 million in the budget for next year for commemoration activities around the Rising. A separate allocation will be made for 2016.

The money is separate from the €22 million already allocated for capital projects, most notably the interpretative centre in the GPO and the refurbishment of Richmond Barracks.

Mr Manning said he hoped the €4 million would be used outside Dublin to fund projects in schools and by local history societies.

Last week a spokeswoman for the Minister for Arts, Heritage and the Gaeltacht Heather Humphreys said a detailed programme of events could not be brought forward until funding was secured, which it has been.

“This will make it a lot easier to push it out. We can push ahead with the consultation period,” the spokeswoman said.

The money will be used to engage schoolchildren and the arts community in preparing for the commemorations. “As far as putting flesh on the bones and activities are concerned, they will be rolled out before Christmas.”