If royals included with other international leaders, ‘it would be appropriate’ 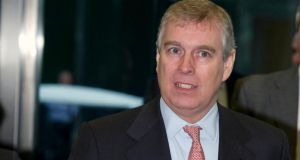 Prince Andrew attended a commemoration in 2003 in Kinsale in Co Cork to mark the 400th anniversary of the Battle of Kinsale. Photograph: Jonathan Buckmaster/Getty Images

The decision to invite members of the British royal family to centenary commemorations of the 1916 Easter Rising would only be appropriate in the context of an international event in Dublin to commemorate those who died for Irish freedom, according to a leading academic.

Prof Mary Daly, president of the Royal Irish Academy and professor of history at University College Dublin, said the appropriateness of inviting members of the British Royal Family to Dublin in 2016 depended entirely on the context of how the Easter Rising is to be commemorated.

“It depends on the context – I mean you can’t invite members of the British royal family and have a line-up where you have the Irish Government, relatives of participants in the Easter Rising and members of the Royal Family in a prominent position. I think that would be inappropriate.

“But if we did an international commemoration, where we invite say the vice president of the United States and representatives from Australia and countries related to the Irish diaspora and the EU, it would be perfectly appropriate to have a representative of the royal family in that context.

“If the German president can go to Belgium and make a very moving speech at the centenary of the outbreak of the Great War, if Angela Merkel can go to the site of the D-Day landings, surely we can work out some arrangement to accommodate a member of the royal family.”

Prince Andrew attended a commemoration in 2003 in Kinsale in Co Cork to mark the 400th anniversary of the Battle of Kinsale. That took place without much fanfare but without any controversy, she said.

Prof Daly, who is a member of the Government-appointed Expert Advisory Group on Centenary Commemorations, made her comments at the Daniel O’Connell Summer School at O’Connell’s home at Derrynane in Co Kerry where she spoke on the theme, History and Memory 1890-1930.

Earlier this year, Prof Diarmaid Ferriter of the department of the modern history at UCD, who is also a member of the Expert Advisory Group, questioned the decision to invite a member of the British royal family and expressed concern that it will be “distorting history quite significantly”.

The decision to invite the royal family was first mooted last September by then tánaiste Eamon Gilmore and appeared to be confirmed by Queen Elizabeth during President Michael D Higgins’s state visit to the UK when she said her family would stand beside him at Irish anniversary events. Addressing an audience of close to 200 people at the Daniel O’Connell Summer School on Saturday, Prof Daly said it should be remembered that thousands of relatives of those who fought in 1916 will be seeking to attend the commemorations and that posed a huge logistical challenge.

“How many descendants are there of those who fought in 1916 – you are well in five figures – how are you accommodate all of those – I know they are already approaches from people all over the world who claim kinship with somebody who fought in 1916 and they want a place there in 2016,” she said.

“Family connections are important to people and all those people want to be there and it’s important to accommodate all these diverse peoples from all over the world so that’s going to be a challenge,” she added.

Prof Daly pointed out that the 2016 commemoration is likely to consist of several events as, with Easter falling on March 27th in 2016, they are likely to last for almost six weeks from Easter Sunday until early May when the last of the 1916 leaders were executed in Kilmainham.

There was also a need to ensure inclusion of northern nationalists, who were notably excluded from the 1966 commemorations due to the Irish government’s fixation with building links with the Terence O’Neill administration in Northern Ireland, and that was a mistake, she added.