Clifden based archaeologist Michael Gibbons reports from the wreck of the Gubiyana in Fahy Bay, West Connemara, which was once a thriving smuggling base in the eighteenth century. Video: Joe Shaughnessy 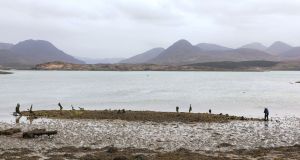 Two shipwrecks dating to the 18th and 19th centuries have been found in Connemara bays that were renowned for smuggling activity.

The older of the two wrecks was located by currach fisherman John Bhaba Jeaic Ó Conghaíle in Cuan Chaisín in Ceantar na nOileáin.

The vessel, believed to date to the 18th century, has been virtually stripped of its timbers.

It is only barely visible at low spring tide by a mound of ballast, believed to be local granite, and nodules of iron revealed in the sandy surface.

Archaeologist Michael Gibbons said that the Cuan Chaisín area, close to a medieval castle at Cuan Chuigéil, is specifically mentioned in smuggling records in the early 18th century.

It was marked as a good anchorage spot on French and British admiralty charts for the area, he said.

The second wreck was discovered by local resident Michael Barry in Fahy Bay on the west side of Ballynakill harbour between Letterfrack and Cleggan in northwest Connemara. Ballynakill’s narrow entrance opens up into a sheltered anchorage against the dramatic backdrop of the Twelve Bens and Diamond hill.

The hull is well inshore from the location of a Spanish Armada vessel, believed to be the Falco Blanco Mediano, a requisitioned supply ship which foundered in 1588 at the mouth of the Ballynakill Bay with 103 people on board.

Most survived, were fed and sheltered by the Conneely clan, until an O’Flaherty who had a knighthood is said to have tipped off the English.

The survivors were marched into Galway and were executed on orders of Sir Richard Bingham.

Mr Gibbons said he believed the new find was far more recent and could date from the 19th century, but the vessel would require excavation for precise identification.

“It may have been run up on the strand for salvage, and it is a textbook example of what a shipwreck should look like,”he said.

“These bays played a major role in maritime history in the 17th and 18th centuries, at a time when busy sea trade meant that Connemara was the centre, rather than periphery,” Mr Gibbons added.

He said that the smuggling business was so large that a whole series of coast guard stations were built to try to stamp it out.

One of the most renowned sea captains and smugglers, George O’Malley, was born on the shore of Ballynakill Bay in an area that was stripped of its population during and after the Famine, he said.