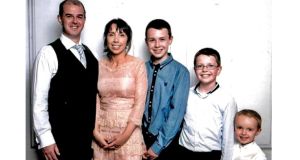 An anniversary Mass for Alan Hawe who killed his wife and three children before killing himself was a stark reminder of how two families remain divided by a common tragedy.

Inside St Mary’s Church in Castlerahan, Co Cavan, parish priest Fr Felim Kelly went ahead with the service on Wednesday evening despite the objections of the family of Mr Hawe’s wife Clodagh (née Coll) who was murdered with her three children, Liam (14), Niall (11) and Ryan (six) on August 29th, 2016 at the family home in Oakdene outside Ballyjamesduff a year ago.

On Sunday morning the church hosted an anniversary mass for Clodagh Hawe and her children. The church was full. By contrast a crowd of about 30 people attended the mass for her husband. Those present congregated towards the back of the church leaving rows of empty seats up front.

Fr Kelly sat rather than stood at the altar for the 7pm evening mass which lasted just 18 minutes.

His preamble acknowledged the horrors of what had happened a year ago. He said that according to the teachings and practice of the Catholic Church, the soul of Alan Hawe should be trusted to the mercy of God “who is the only rightful judge”.

Two families were left “sobbing with grief”, he added. He offered prayers for Clodagh Hawe and her three children. During the prayers of the faithful, he offered prayers too for Alan Hawe’s parents who live in Co Kilkenny.

He asked for prayers too for the community and especially the local children as they start a new year in the adjacent national school where Mr Hawe had been deputy principal.

He concluded by asking the congregation to pray for Clodagh’s mother Mary Coll and Clodagh’s sister and hoped that God would “walk with them in the darkness” and assuage their “troubles and pain”.

But the Coll family could not have made their opposition to the mass more clear. As it was going on, seven members pointedly kept vigil at the grave of Clodagh and their children in the grounds of the church.

Four temporary crosses, a brown one for Clodagh and white ones for the children reflect the relatively recent nature of the grave. There is no headstone yet, but the grave is concreted over and the remains of Alan Hawe are gone. They were exhumed in May and he was cremated.

The grave is festooned with flowers, a toy lighthouse, a faded Castlerahan flag, a toy car and a Santa figure.

Clodagh’s sister Jacqueline Connolly, who was present at the graveside on Wednesday night, outlined her opposition to the mass for Alan Hawe in a posting left on The Irish Times Facebook page.

Underneath a report on the mass which was held in the church on Sunday for Clodagh and her children, she pointed out that the Coll family “did not organise a separate mass for the mass murderer Hawe. He was exhumed from that parish in May.

“We do not know who would be so disrespectful as to organise same”.

After the mass, a member of the family, who wished to remain anonymous, said in response to Fr Kelly’s assertion that only God could judge Alan Hawe, “did God decide that his family should die that way?”