Sherkin Island: a magnet of creativity for artists, writers and musicians

Creativity rubs off on everyone on the ‘Island of the Arts’ 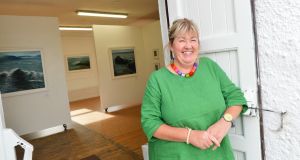 One day Aisling Moran glanced out of the window of her office on Sherkin Island and spotted a local fisherman driving past in his van.

Nothing unusual there – apart from the long brown rectangular object protruding from the back of the vehicle.

The object, as Moran, development worker with the Sherkin Island community, later discovered, was a wickerwork coffin the man had woven himself.

“I later discovered that a group of people had come to the island to learn how to make wicker coffins,” she recalls.

“The man I saw driving past my window is extremely talented at all kinds of wickerwork and he’d been asked to demonstrate the art of making wicker coffins.”

That’s Sherkin for you, she says.

It’s the kind of place where passengers step off the ferry to find a state-of-the-art parlour, complete with wallpaper and a table set for tea, awaiting them on the pier – the little building has somehow been magically transformed from its usual role of local shelter.

A hiker will look up from his map to see a large art installation in a field in the middle of nowhere, or you’ll find yourself sun-bathing beside something strange at the local beach.

“Sherkin is an amazing place. Many residents on the island make an income from painting, arts, crafts or knitting – we have jewellers, basket-weavers, poets, musicians and writers,” says Moran.

“That creativity rubs off on everyone and permeates the air.

A lot of people here are multifunctional and nearly everyone is highly creative; it’s a phenomenal thing.”

It’s also why – along with the decision to site a third-level honours degree programme in art there – this small, beautiful island off the coast of west Cork is known as the Island of the Arts.

Accredited by the Dublin Institute of Technology, the four-year bachelor of arts visual arts programme, which has been running on the island since 2008, has underlined Sherkin’s status as a renowned cultural hub.

As Sherkin-based artist and island resident for some 30 years Majella O’Neill Collins, explains that Sherkin has been “arty” since the 1970s.

“Sherkin’s reputation for being an island of the arts goes back to 1976 when the first open-air concert ever to be held in Ireland took place there. De Danann, Christy Moore and Clannad all played there, and it was really the beginning of Sherkin’s identity as a cultural hub.”

From then on, the island started to attract writers, poets, artists, musicians and other artists, from Ireland and abroad. There are now about 20 individual artists’ studios, says O’Neill Collins.

“They [full-time artists] live here all the time. They’re very much part of the daily fabric of life in Sherkin.

“Sherkin is like a magnet of creativity. It’s very beautiful and it’s completely ruled by the weather. You’ll either love it or you won’t – it’s an immediate reaction,” she says.

“Over the years I’ve seen creative people arriving here from all over the world. They keep coming back!”

Sherkin, she says, was never taken over by the Celtic Tiger:

“It remained quite untouched and we don’t have complexes of holiday homes or apartments like a lot of places.

“It is known throughout Ireland and internationally as the Island of the Arts.

“Sherkin has always had very good music in the pubs too – musicians tend to turn up in The Jolly Roger and The Islander’s Rest and just start to play.”

The community is a very important element of the visual arts degree programme, says O’Neill Collins, who is one of the course facilitators:

“Students will exhibit their work on the pier, for example or on the beach or on the ferry itself!

“You could have an artistic installation going up in the middle of a field, or you’ll often see someone from the community working with an artist on the beach.

“The community here is very accepting and very open to artists. Art is not an elite thing here; the local fishermen or the farmers are very used to getting involved in projects that deal with the arts. Nowhere in Europe is there a course that operates like this.

“About three months ago, a group of students turned the pier shelter into a real-life parlour with wallpaper, tables and tea and coffee and bread and butter; and people getting off the ferry were thoroughly enjoying it!

“The way art is created on Sherkin makes it very accessible; it makes art very much part of people’s day-to-day life – it’s not in a big white gallery space away from the public.

“Art is very much a part of the DNA of Sherkin.”