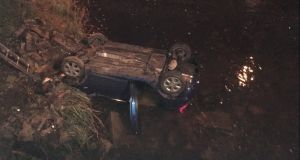 A car lies in the River Liffey at Celbridge, Co Kildare. Photograph: Tallaght Ambulance via Twitter

Two cars crash into the River Liffey as they were pursued by gardaí in Celbridge, Co Kildare in the early hours of Wednesday morning.

The ambulance service said noone was seriously injured in either car.

One of the cars appeared to have overturned on entering the water and could been seen on its roof at the riverbank, while a second, blue hatchback could be seen sitting in water just below the town bridge.

The Garda Press Office said gardai were alerted to a burglary at the Weston housing estate in Lucan shortly after 4am.

Two cars fled from the scene and drove towards Celbridge before crashing through a barrier and entering the river at Celbridge bridge.

Water levels were low at the time and the vehicles could be seen sitting in the river by commuters during the morning rush.

Two young men who were arrested at the scene are currently detained at Lucan Garda station under the provisions of Section 4 of the Criminal Justice Act 1984.