US president to arrive in Shannon Airport on Wednesday, June 5th, for a brief stay 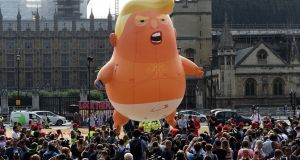 The Trump blimp flew over London during the US president’s visit there last year. Photograph: EPA

A six-metre high orange blimp depicting Donald Trump as a crybaby in a nappy will fly over a protest in central Dublin against the US president’s visit to Ireland next week, say organisers.

The inflatable cost €10,000 which was raised through crowd-funding. It was the focal point of demonstrations against Mr Trump in London in July last year, and was due to come to Ireland for his planned trip last November before the visit was canceled.

Uplift, one of dozens of organisations set to take part in a protests this week, says it plans to float the hot air balloon over a “Stand Up to Trump” rally on Thursday at the Garden of Remembrance at Dublin’s Parnell Square.

Shea Flanagan, lead organiser, said it is bringing the blimp over from its “ babysitters” in London for Mr Trump’s arrival in Ireland.

“We want to send a message to the world that Trump is not welcome in Ireland — his politics of hate, fear and division affect the lives of real people,” he said.

“The blimp is a fun symbol for serious work, to come together and fight for progressive politics.”

Mr Flanagan said he did not anticipate any refusal of permission from Dublin City Council or the Garda who, he said, have been notified about the event. Both have yet to comment.

Labour senator Aodhán Ó Ríordán has said he is holding talks with the Greens and other “progressives and democrats across all parties and none” to co-ordinate a political-led protest to Mr Trump’s visit.

Two weeks ago, Taoiseach Leo Varadkar said the US president is welcome in Ireland but protest “is allowed and is welcome” too.

Asked what he would say to people planning protests for the visit, Mr Varadkar said: “I’d say to them, this is a democracy and peaceful protest is part of democracy. And I would certainly never criticise anyone for taking part in a protest if that’s the way they wish to express their views.”

It is expected Mr Trump will stay two nights at his Co Clare golf course next week. He is due to arrive in Shannon Airport on Wednesday, June 5th, at the end of his three-day state visit to Britain. He will then depart on the morning of June 6th for Normandy where he is due to attend the 75th anniversary of the D-Day invasion.

1 Urgent report on Dublin eviction ordered by Deputy Garda Commissioner
2 Inside the O’Brien Fine Foods factory in lockdown Kildare
3 A million trees, including 400,000 oaks, to be destroyed this week
4 ‘It was pitch black’ - Rescued teenager describes night afloat with her cousin in Galway Bay
5 Cousins went paddle boarding at Furbo as usual location was cut off due to Covid-19
Real news has value SUBSCRIBE