Martina McCarron, from Co Tyrone, did not contract the virus as a result of her occupation, it is understood 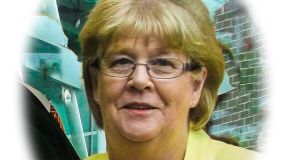 Martina McCarron, who was a great-grandmother, had worked as a carer for more than 20 years, most recently with NW Care.

A care worker who died of coronavirus in Co Tyrone was “greatly loved and respected” in her local area, her family has said.

It is understood Martina McCarron did not contract the virus as a result of her occupation.

Mrs McCarron, from Fintona, tested positive for coronavirus on April 10th and died in hospital on April 15th, her family said in a statement to the Tyrone Constitution on Monday.

Mrs McCarron, who was a great-grandmother, had worked as a carer for more than 20 years, most recently with NW Care.

In a post on social media, NW Care said Mrs McCarron’s death was “a huge loss to us all and the wider community which she passionately served.

“Martina was and will always be one of our heroes.”

“We salute Martina for her courage and dedication in caring for others at this difficult time.”

Mrs McCarron’s family said their mother had been “passionate” about her work as a carer.

“She was such a caring lady that she went above and beyond the call of duty.

“She got to know the people she cared with on a personal level, to the point where she would ring them to ensure they were ok as she was genuinely worried if they were ill or members of their family were going through something difficult.

“She counted the people she cared for as family and was always ready to lend an ear.”

In their statement, Mrs McCarron’s family thanked the staff in the high dependency unit in the South West Acute Hospital in Enniskillen, Co Fermanagh, who had cared for their mother, and “all frontline workers who are currently putting themselves at risk.”