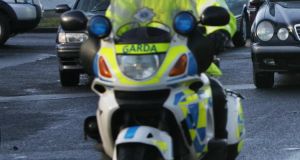 paid to a garda who suffered serious injuries when he was struck by a stolen van during a high-speed pursuit in Cork yesterday morning.

Garda Michael Twomey (35), a member of the Traffic Corps in Cork city, was stopping traffic at Rathduff on the main N20 Cork-Mallow road at around 9.15am when he was struck by the stolen van.

According to Supt Con Cadogan of Gurranebraher Garda station, Garda Twomey was thrown 30ft from his motorbike.

“Only for Mick Twomey stopping those motorists, and motorists coming out from Cork, because he knew the stolen van would exit on to the road at Rathduff, it could have been even more serious.”

Garda Twomey, who is married with a young family, suffered back, rib and neck injuries, and was last night recovering at Cork University Hospital.

The drama, which involved 30 gardaí and 14 patrol cars as they sought to stop the stolen van as it hit speeds in excess of 100k/ph, began on Cork’s southside shortly after 8am yesterday. An off-duty garda spotted the white van on the city side of Passage West as he was returning home from work.

The van had been stolen from MacCurtain Street in the city centre on Thursday afternoon and used in a burglary where alcohol was stolen at the Vienna Woods Hotel in Glanmire at 6am.

Gardaí from Douglas set up a checkpoint at the Fingerpost in Douglas village to stop the van but the van drove through the checkpoint at high speed as it headed back into Cork city centre.

The van continued at high speed along the Douglas Road towards the city centre, colliding with four cars before it sideswiped a Garda van that tried to stop it at Parnell Place.

Gardaí anticipated that the van would eventually exit the Old Mallow Road and go on to the main Cork-Mallow road at Rathduff, some 19km from Cork, and they set up a stinger to stop the vehicle. It was here the van did a U-turn, crashing into Garda Twomey.

Gardaí corned the van after it went on to the old Killeens road. Both the driver and passenger, who are aged 28 and 27 and from the Fairhill area of Cork, were arrested and taken to Gurranebraher Garda station for questioning.