Tribute for Berkeley victims at Man Utd match in California 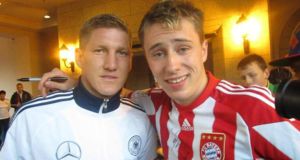 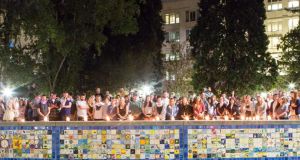 Participants at a vigil for the victims of the Berkeley Tragedy at Martin Luther King Jr. Civic Center Park in Berkeley, California. Photograph: Martin Lacey 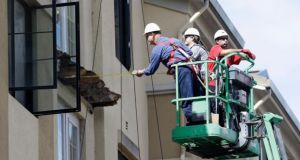 A worker measures near the remaining wood from the apartment building balcony that collapsed in Berkeley, California. Photograph: AP Photo/Jeff Chiu 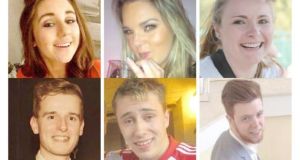 A minute’s silence will be held before Manchester United’s game against San Jose Earthquakes in California on Tuesday night as a tribute to the six victims and seven survivors of the Berkeley balcony collapse.

The Premier League team play the northern Californian Major League Soccer side as part of the English club’s summer tour of the US.

The minute’s silence, scheduled to take place just before kick-off at 7.34pm (3.34am Irish time), is being organised by friends of the Berkeley families as a mark of respect to the relatives and friends of those Irish J-1 students killed and injured in the incident in Berkeley last month.

The fixture will be the second Manchester United game for newly-signed German international Bastian Schweinsteiger idolised by Nick Schuster, one of the six students who died in the June 16th tragedy.

The game was originally meant to have been played at the 60,000-seat University of California Berkeley’s Memorial Stadium in Berkeley but was moved to San Jose to the 18,000-seat Avaya Stadium in San Jose to meet Manchester United’s travel and logistical requirements.

A photograph of a beaming Mr Schuster posing with the German soccer star and wearing the jersey of his beloved Bayern Munich, Schweinsteiger’s former club, was widely circulated after the collapse.

Schweinsteiger paid tribute to the 21-year-old Dublin student in the wake of the tragedy, posting a message on his Facebook page to say the news of the deaths of the students made him very sad. He wished Mr Schuster’s family “a lot of strength for this difficult time”.

The German footballing star will have an opportunity to pay his respects in California at the game which takes place in San Jose, about 80kms south-east of Berkeley in Silicon Valley.

Many of the Irish J-1 students in California are expected to attend.

There are strong connections, both cultural and sporting, between San Jose and Ireland. The Californian city is twinned with Dublin and the San Jose-Dublin Sister City Committee, which organises events involving the two cities, has close ties with the Earthquakes.

Three of the seven Dublin students seriously injured in the balcony collapse - Aoife Beary, Hannah Waters and Clodagh Cogley - are being treated in nearby Santa Clara Valley Medical Centre.

A fourth student Niall Murray, who has been treated in a San Francisco hospital, is due to be transferred to Santa Clara, which specialises in rehabilitation after serious brain and spinal injuries.

Three other injured students, Sean Fahey, Jack Halpin and Conor Flynn, have been discharged from hospital.

Mr Fahey and Mr Halpin have returned to Dublin.

Mr Flynn is expected to return to Ireland shortly. He has been unable to travel due to a punctured lung.

City of Berkeley building safe inspectors have blamed the collapse on dry rot in the balcony’s support beams caused by water damage.