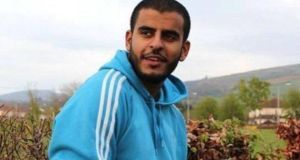 Irish student Ibrahim Halawa was arrested after a protest in August 2013 and has been held in an Egyptian prison since then.

Irish teenager Ibrahim Halawa’s trial in Egypt has been postponed until August 2nd.

The 19-year-old from Firhouse in south Dublin was arrested after a protest in August 2013 and has been held in an Egyptian prison since then.

Mr Halawa, whose father Sheikh Hussein Halawa is the imam of Ireland’s largest mosque, is being tried as part of a mass court action against almost 500 people.

Mr Halawa and his three sisters sought sanctuary in the Al Fateh mosque amid violent clashes between supporters of ousted president Mohammed Morsi and the security forces .

His sisters - Omaima (20), Fatima (22) and Somaia (27) - have since returned to Dublin. They had been held separately from their brother in Tora prison.

A spokeswoman from the Department of Foreign Affairs said the hearing took place with Irish officals in attendance.

She said the trial could not go ahead as 16 defendents were not at court.

Defence lawyers asked for the trial not to proceed during the Muslim holy month of Ramadan.

The judge agreed to adjourn the proceedings until August 2nd.

Mr Halawa’s sister Nusayba, spoke to Newstalk radio on Wednesday and confirmed her brother’s trial had been postponed.

The human rights organisation Amnesty International has described Mr Halawa as a prisoner of conscience and has been campaigning for his release.

Mr Halawa was refused bail on April 26th and his trial was adjourned. Under Egyptian law, Mr Halawa is considered an Egyptian citizen.

Minister for Foreign Affairs Charlie Flanagan was disappointed by the court’s decision not to grant the student bail.

“It is extremely disappointing that the application for bail made by Ibrahim Halawa’s lawyers, and supported by the Irish Government, has been rejected,” he said.

“Our objectives in this case remain clear - to see this young Irish citizen released by the Egyptian authorities, and to provide consular support while he remains in detention.”