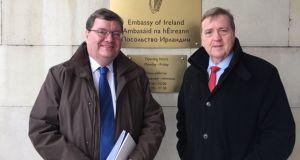 Ireland is targeting a reset in relations with Russia in an attempt to reinvigorate trade and political ties damaged by a four-year sanctions war between the Kremlin and the European Union.

Agriculture appears to be the main area of focus in this drive, and there is certainly lost ground to be made up. Irish agricultural exports to Russia almost halved between 2014 and 2016 (from €722 million to €364 million) as pork, dairy and poultry were among foodstuffs banned by Russia in the tit-for-tat dispute.

The Kremlin has extended this food import ban until this December, as the EU prolonged its sanctions targeting individuals and companies for Russia’s involvement in the Ukrainian conflict and its annexation of Crimea.

Nonetheless, Minister of State for Trade Pat Breen said “sanctions are not there forever” and,as the Russian economy evolves, “hopefully they get closer relations to the European Union”.

Breen led a delegation of 17 people from the agricultural sector earlier this month to visit Agrofarm, a vast Moscow trade show on animal breeding and production. Breen, who met deputies from the Duma and Igor Neverov, head of the Russian foreign ministry’s European section, said Ireland had to use its strengths in agritech and genomics for breeding cattle to expand its influence further in Russia.

“The Russian agricultural sector is not a sector that has grown dramatically,” Breen told The Irish Times. “It’s very, very backward and there are huge opportunities here for Irish companies. It’s an opportune time for us to have a think about Russian relations and see which areas we can grow trade between our two countries.”

Breen said it was “important for us to have the Embassy and the agencies” in Russia and noted the reopening of the Iranian market after a considerable period of isolation as an example of opportunities that can arise.

“It will happen and we have to be ready for it because it’s such a huge market,” he added.

In addition to the agriculture delegation, Minister of State for Training John Halligan will lead a trade mission next month to Russia’s largest aviation trade fair, where Enterprise Ireland and Dublin Aerospace will have stands.

Tánaiste and Minister for Foreign Affairs Simon Coveney also met Russia’s deputy justice minister Maxim Travnikov in Dublin in December for a meeting of a working group aimed at nurturing trade, economic and investment co-operation between the nations.

Chris Weafer, founder of Moscow-based consultancy Macro Advisory and previously chief strategist at Sberbank CIB, the investment arm of Russia’s largest bank, said it appeared there was a “serious effort” by Ireland to engage with Moscow as Russia seeks to diversify its economy away from oil and gas.

“Ireland is viewed very favourably by Russians and by the Kremlin. Ireland offers expertise is many areas that Russia is targeting for growth or needs to improve,” he said.

A spokesman for the Department of Foreign Affairs and Trade denied there had been any change in the Government’s position towards Russia. Prior to recent engagements, he said the last ministerial visit to Russia was in December 2015 by then minister of state Seán Sherlock.

“Despite the current difficulties in EU-Russian relations, bilateral engagement by Member States continues,” the spokesman said. “In common with our European partners, Ireland recognises the importance of maintaining dialogue with Russia at a national level on issues of mutual interest. Ireland has long standing relations with Russia and this year marks the 45th anniversary of diplomatic relations.”

One area where relations remain complicated is Crimea.

Eyebrows were raised when it emerged that late last year Paddy Duffy, who served as an adviser to Bertie Ahern while he was taoiseach, and Conor Martin, chief executive of property investor Marcon Capital, travelled to Moscow and met senior Russian officials to talk about investing in hotels in Crimea, the territory annexed by the Kremlin from Ukraine.

EU companies and citizens have been banned from investing in Crimea or supplying services since Russian military forces seized control in March 2014.

Breen said discussions by Irish businessmen to invest in Crimea were a matter for the Minister for Foreign Affairs, but said he would be astonished if they went against the sanctions in place.

Ireland’s Ambassador to Russia Adrian McDaid said: “There is certainly a sanctions agreement in place in relation to Crimea and that [investing there] would certainly be against our policy advice.”

Despite the sanctions, many international food and beverage companies such as Cargill, Procter and Gamble, Mars, Danone and Unilever have production facilities in the country and more recent investors include the CP Group of Thailand and the Vietnamese TH group.

The five companies pitched their products and services to decision-makers from the Russian agriculture sector, including farm operators.

Getting some pick up from the right customers could be a huge thing for such firms given the largest farm in Russia is more than 570,000 hectares in size – almost twice as big as Co Clare.

Some Irish companies already have a presence in Russia, and Breen visited Kerry Group’s regional centre of excellence and innovation on the outskirts of Moscow. The company is to start production at a new facility near Moscow later this year which will employ about 100 people and is looking at taste trends and researching new food and beverage products.

“It’s a great advantage for us that Kerry is leading the field and they have stayed during difficult times,” Breen said.

Gerry MacCarthy, Enterprise Ireland’s manager for Russia, said helping client companies to identify new markets for their products and services is part of the agency’s strategy to enable its clients to build scale and expand global reach as part of its response to Brexit, which has raised fears about Irish agri-exports.

The increased focus on Russia appears to be paying off, with the Department of Foreign Affairs and Trade estimating the value of Irish exports to Russia increased to €500 million last year, an increase of almost 40 per cent.

Ireland is not the only EU country looking to engage more actively with Russia. German exports to Russia jumped by 21 per cent last year, and Belgium’s prime minister was in Moscow recently to sign a deal to build a gas terminal in Zeebrugge to take gas from a plant in Siberia.

“The Kremlin’s mantra is that bad politics should not be allowed damage good business,” said Weafer. “It is very open to foreign investors and keen to expand trade partnerships.

Constantin Gurdgiev, adjunct professor of finance at Trinity College, said stabilisation of the Russian economy and strategic policy changes over the past two years have brought new opportunities for foreign investment.

“Ireland is by no means the first or an early mover in this but the government is realising there is a growing need to restart old relationships and move with trade,” he said, adding Italy and France have started putting “proactive efforts to expand their links to Europe’s largest middle-income economy.”

Weafer, whose company advises some of the biggest multinationals active in Russia, expects Ireland will abide by the legal restrictions but can safely ignore any disapproving comments from EU officials.

“What we are seeing is that while companies and countries are abiding by the letter of the sanctions law, they are increasingly looking at ways to side-step it and do more business with Russia,” said Weafer.

“The Brussels bureaucrats want to stay in line with the US on sanctions, but individual states and companies are taking the road to Moscow. There is too much business and profit at stake and nobody wants to lose out just because some EU officials may disapprove,” he added.