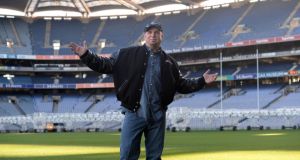 Croke Park stadium director Peter McKenna said after the Garth Brooks fiasco he did not want a situation again where ‘people buy tickets on the maybe’. Photograph: Dara Mac Dónaill

Croke Park stadium director Peter McKenna has said that, in the wake of the Garth Brooks fiasco, he does not ever want a repeat of the situation where “people buy tickets on the maybe”. He wants ticket sales to be on the basis of “will happen”.

Mr McKenna also said proposed matinees would not have worked in the stadium and he did not rule out the country singer performing at the venue next year.

He was speaking about the cancellation of all five pre-sold Garth Brooks concerts which were due to take place at Croke Park last month.

Dublin City Council refused permission for two of the five nights following protests from local residents about the level of disruption.

“Until the legislation is changed or tightened, it could occur again and that is not something that should be allowed,” he said.

Mr McKenna said he would work with Dublin City Council and Minister for the Environment Alan Kelly to “interrogate this process and get something that works going forward” so that “what happened will never happen again”.

The matinees were proposed as a way of scheduling the five concerts in three days.

Some fans were annoyed when the singer announced matinee concerts for Chicago not long after he had rejected a similar proposal in Dublin.

However Mr McKenna said that the venue in Chicago, the Allstate Arena, has a capacity of just 18,000, far smaller than that at Croke Park.

He was speaking at the launch of the programme for the Croke Park Classic American football game between University of Central Florida and Penn State on August 30th.

Croke Park would love to have Brooks, who is about to embark on a world tour, back to play, he said.

However he ruled out a concert any time this year. The next available dates were in October and it would be too cold, he said. However there are dates available in 2015.

The venue needed to work with local residents to ensure the “level of animosity is gone” following this year’s events, he said.

“We need to build an accord with the local community that is a lot more stable,” he said. “Real leaders” in the community had emerged during the Brooks saga, he added.

The stadium lost out on €5 million in revenue from the concerts .

Mr McKenna said rail strikes planned for the same dates as the all-Ireland football and hurling finals would be “very disruptive”. He said he hoped the strikes would not go ahead and noted that talks were “ongoing”.