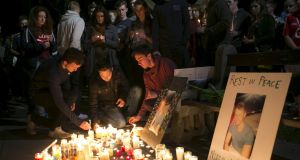 Men place candles during a candlelight vigil for the victims of the Berkeley balcony collapse in Berkeley, California. Photograph: Reuters/ Elijah Nouvelage

Three Irish students who witnessed the Berkeley balcony collapse that killed six students and gravely injured seven others have settled their legal actions against the property’s owner and manager.

Caroline Conlan, Cliodhna Maloney and Aisling Tallon sued US asset manager BlackRock and property manager Greystar over “severe mental and emotional harm” after they stepped off a balcony into their fourth-floor apartment just before it collapsed at Library Gardens complex in Berkeley, California in 2015.

The three women witnessed 13 students fall as the balcony fell from under them and were among the first to respond to the scene below, helping their friends before police and other emergency services arrived.

Last November lawyers for the six deceased Irish students – five from Dublin and an Irish-American student from Rohnert Park in California – and the seven other students injured in the incident settled lawsuits with the main defendants in their lawsuits, BlackRock and Greystar.

The status of the cases taken by the three former witnesses were unclear at that point.

In its recently published annual report, Blackrock referred to the lawsuits taken by Ms Conlan, Ms Maloney and Ms Tallon. It said three former tenants of the Library Gardens apartment unit “who were not physically injured but experienced the balcony collapse sued the Blackrock parties for emotional damages”.

“In November 2017, the BlackRock parties settled all of the lawsuits relating to the Library Gardens,” the company, one of the world’s largest asset managers, disclosed in the annual report.

The three students, who had moved into the apartment two weeks before the tragedy, were among a large group of Irish friends from Dublin who travelled to California on J-1 student working holiday visas and were celebrating a 21st birthday party at the time of the collapse in the early hours of June 16th, 2015.

They issued legal proceedings five months after the families of the deceased students and the injured students brought their own lawsuits against BlackRock, Greystar, builder Segue Construction and other building subcontractors over defects that led to dry rot destroying the timber balcony joists.

Legal papers filed in April with the California Superior Court for the County of Alameda, which covers Berkeley, shows that the seven injured students and the families for the six deceased students requested that their lawsuits be dismissed by the court, ending the legal proceedings following the settlements.

The full sums paid to the students and the families were never disclosed as confidentiality agreements covered the settlements but they are understood to run to substantial multi-million dollar sums for damages.

This month marks the third anniversary of one of the worst tragedies affecting Irish students abroad.

Investigators in California concluded that inferior materials were used in the construction of the balcony that failed to waterproof the structure.

Segue, based in Pleasanton near San Francisco, had its building licence revoked by the state of California after it was found to have “wilfully departed or disregarded building plans or specifications and wilfully departed from accepted standards for good and workmanlike construction” in building the apartment block.

As part of the settlement, BlackRock and Greystar agreed to change their procedures to inspect balconies on their properties regularly to prevent such a tragedy occurring again.