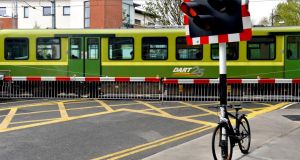 The National Bus and Rail Union (NBRU) and Siptu have rejected proposals for roster changes for drivers to facilitate the introduction of a 10-minute frequency Dart service which Iarnród Éireann wants to introduce in January.

The union has warned the row could lead to further industrial relations unrest on the country’s railways.

The introduction of a more frequent Dart service is one of the key goals for Iarnród Éireann in 2016.

However, the NBRU argued plans for an increase in Dart service frequency had not been agreed.

The NBRU and Siptu, which also represents train drivers, are engaged in a process for dealing with a claim for payment for past productivity measures.

“By issuing unworkable rosters, the company is setting its face against the long-standing principle of not acting unilaterally whilst in a process recommended by the State’s foremost industrial relations institution, the Labour Court. ”

He said the court had maintained that both the company and the unions should enter a process of negotiation on productivity.

“What is ironic here is the fact that it was the company which advanced the notion of a 10-minute Dart service as a productivity measure in the first instance.

“We have previously advised the company that it was being presumptuous by announcing that a 10-minute Dart service would commence in January 2016 without advance consultation.

“It would now appear that Iarnród Éireann have decided to embark on a collision course with drivers which will only serve to heighten tensions and runs the risk of reigniting the recent conflict which led to industrial action and trains not running for a number of hours,” Mr O’Leady stated.

Train drivers staged a three-hour work stoppage in October as part of the dispute over payment for past productivity measures.

A spokesman for Iarnród Éireannsaid it had proposed rosters which were “entirely workable” within existing roster parameters as the company had trained up new drivers.

“Unfortunately the trade union leadership instructed local representatives not to participate in the normal process and as a result they did not even get a chance to review the new rosters,” he said.

The spokesman said the new higher-frequency Dart service was being proposed to address growing demand.

He said the trade unions instead appeared to want to cause an unnecessary conflict.