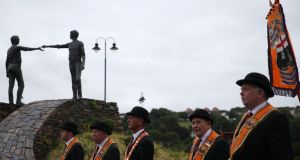 Parades to commemorate the 228th anniversary of the Battle of the Boyne concluded peacefully throughout Northern Ireland on Thursday evening following some sporadic Eleventh Night trouble.

Among those who attended the Belfast parade was Minister of State for Tourism Brendan Griffin.

The Belfast parade, which drew the largest attendance of all 17 Orange Order parades, was momentarily halted so that Mr Griffin could be handed a gift of a neck-tie from representatives of the loyalist institution.

Mr Griffin was welcomed to the parade by the Orange county grand master, Spencer Beattie, as he watched the march from a vantage point on the Dublin Road in central Belfast.

Mr Griffin is not the first southern minister to officially attend an Orange parade. In 2012, the then minister for tourism Leo Varadkar was welcomed to the Fermanagh parade.

Mr Griffin said that once his visit would have been “unthinkable”, adding: “We’re making great progress; we’ve a long way to go but all of these little steps are all positive steps.”

Ahead of the parade, Mr Griffin discussed with leaders of the order the tourist potential of the Orange tradition.

Mr Gibson said people were interested in the order “not as a relic of the past, but as a living organisation that is a key stakeholder in wider society”. He added that he spoke to Mr Griffin “of the common cause we have of promoting the Boyne and other sites for the tourist market”.

The largest parade, with more that 150 lodges and some 65 bands, was held in Loughgall, Co Armagh, where the order was founded in 1795, while the biggest turnout of spectators was in Belfast, where Orangemen and women paraded behind some 60 bands.

One of those who observed the Loughgall parade was former Irish rugby captain Brian O’Driscoll who was filming a BT television programme on the unifying power of his sport. During his visit he was given an opportunity to play a Lambeg drum.

The parades took place following disputes over a number of Eleventh Night loyalist bonfires that triggered trouble in parts of Belfast and in Newtownards, Co Down. Police said that the Ulster Volunteer Force orchestrated some of this disorder.

On Wednesday night Derry city experienced its fifth successive night of disturbances in the nationalist Bogside area, where police said the trouble was fomented by dissident republicans. The PSNI said it was treating as attempted murder the throwing of “crude but viable” explosive devices at police in the city in the early hours of Thursday morning.

There was some tension in Derry during the Orange Order parade in the city, but at the time of writing, after the parade had concluded, there had been no trouble.

Earlier on Thursday morning the feeder parade past the Ardoyne shops in north Belfast – a source of serious sectarian disorder for many years – passed off without incident, as the agreement held whereby Orangemen paraded in the morning but didn’t make a return parade on Thursday night.

The PSNI condemned what it described as the “sporadic disorder” that occurred on the Eleventh night in areas of Belfast, Newtownards and Derry. This was triggered by action taken to reduce the size of what were deemed dangerously large bonfires.

“The general levels of calls for assistance last night were similar to what we have seen in recent years. However, we did deal with disorder and disruption which saw 13 vehicles burnt out in Belfast and Newtownards and petrol bombs thrown at my officers in Derry/Londonderry,” said assistant chief constable Alan Todd.

He said there were also a number of security alerts. “No part of this is acceptable and today we are looking at the evidential picture to pursue lines of inquiry,” he added.