Thousands of protesters to take to Dublin streets 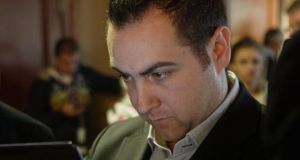 Tens of thousands of protesters are expected to take part in marches across Dublin today, with protests planned in dozens of locations throughout the city.

The protests, starting between 11am and 2pm, will be staggered throughout the morning and early afternoon.

Conor Vaughan of AA Roadwatch said it was difficult to predict the scale and extent of traffic disruptions given the geographic spread of the protests but said it was likely that there would be an impact on traffic.

“To be honest we don’t quite know what to expect. The last time round there was a protest in Dublin on a similar issue the protest was concentrated in the city centre . . . it’s possible that [the spread of the protests] could prove more disruptive,” he said.

“People going into the cities and larger towns for ordinary purposes should be aware that there could be traffic disruptions,” he said, adding that AA Roadwatch would be updating its website and Twitter feed throughout the day.

DublinTown, a collective of 2,500 businesses in Dublin city centre, called on organisers to avoid “excessive disruption” to the public. “While we absolutely respect the right to protest, the ability to protest and articulate one’s views can be done in a way that respects the rights of other users of the city,” chief executive Richard Guiney said.

Five trade unions affiliated to Right2Water – Unite, Mandate, the Civil Public and Services Union, the Communications Workers’ Union, and plasterers’ union OPATSI – have urged their members to join demonstrations which are planned nationwide.

Matt Waine, an Anti Austerity Alliance member of Fingal County Council and organiser of the We Won’t Pay the Water Tax – Dublin 15, said it had distributed some 26,000 leaflets about the protests through a network of 150 volunteers.

“I have been politically active for 14 years . . . and I have never witnessed the level of involvement or determination on behalf of ordinary people as I have on this issue,” he said.

“The biggest mistake that the Government or Irish Water could make is if they write this off as a protest by a few activists or a few political organisations. This is a groundswell, grassroots uprising of people,” he said.

Joe Mooney, a community activist and a former chair of the East Wall Residents Association said the backlash being witnessed over water charges was the cumulative effect of austerity over recent years. “People have had enough, they have given and given over the past few years,” he said.